As a result of the coronavirus outbreak, many film productions have come to an abrupt halt, including Marvel Studio’s highly-anticipated movie, Shang-Chi and the Legend of the Ten Rings <上氣>. With filming pushed back, fans have no choice but to anxiously await the completion of Marvel’s first Asian-led superhero film, starring Simu Liu (劉思慕) as titular character Shang-Chi and Tony Leung (梁朝偉) as The Mandarin. According to Murphy’s Multiverse, viewers may also see Chinese actress Fala Chen (陳法拉) taking on a key role.

Sources believe Fala is cast as MI6 Agent Leiko Wu since that role has not been filled yet. Leiko Wu is a martial artist who teams up with Shang-Chi to fight against his enemy, The Mandarin. She also plays the love interest of fellow MI6 Agent Clive Reston. 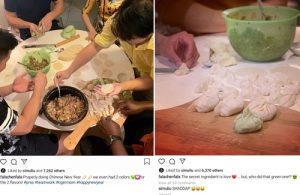 Murphy’s Multiverse connected the dots when they noticed Fala mutually follows Simu and Shang-Chi director Destin Daniel Cretton on social media. They also discovered Simu has been liking and commenting on Fala’s Instagram posts. In late January, the actress shared a photo of handmade dumplings online, and Simu’s comment on the picture suggested that he had participated in the cooking session.