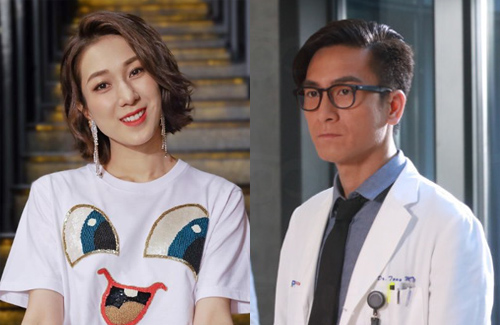 With COVID-19 infection rates increasing in Hong Kong recently, TVB decided to be more cautious and postpone the start of filming two high-profile productions, Big White Duel 2 <白色強人2> and Children’s Hospital <兒科醫生>. Starring in both dramas, Kenneth Ma (馬國明) reveals that he is using the extra time to prepare for his doctor roles.

Children’s Hospital was originally scheduled to start filming in July, followed by Big White Duel 2 in October.  Now that Children’s Hospital‘s filming schedule is delayed, this will ultimately affect the latter drama. The producer of Big White Duel 2 Marco Law (羅永賢) shared, “We will likely delay the start of filming until early November as we have to wait for Kenneth to finish filming Children’s Hospital first. We will not film any outdoor scenes in China–the earliest we would go is early 2021. I hope the pandemic can stabilize soon.”

Filming both dramas back-to-back, Kenneth has been taking advantage of the time to prepare more fully for his role in Children’s Hospital. Though Kenneth has portrayed doctor roles 13 times in 20 dramas, including specialists in neurosurgery and cardiology, this will be the first time Kenneth will be a pediatrician, so he has to familiarize himself with the medical jargon.

When teased if he is spending time with girlfriend Roxanne Tong (湯洛雯), Kenneth said, “We do not go on dates every day.” Aside from studying his script at home, Kenneth has been trying to exercise more. “I do jump ropes on the rooftop, push-ups, and planks. If there is no absolute need, I avoid going out. I hope the pandemic will pass soon.”

On whether his work and earning power have been affected by a slowdown in work, Kenneth replied, “It’s still okay. My manager will continue to book jobs that will start later. It hasn’t affected me too much. In my past projects.”

Also starring in Children’s Hospital is Linda Chung (鍾嘉欣). As this is her first drama since becoming a mother of two children, Linda had especially flown back to Hong Kong early to allow time for quarantine.  Since the drama is now delayed, Linda was asked whether she will return to Canada to spend time with her family. She shared, “The most important thing is that everyone is safe. The plan is still to finish filming the drama on time, as originally scheduled. Hopefully, we can control the pandemic soon.”

Taking part in Children’s Hospital as well, Bowie Cheung (張寶兒) added, “It can’t be helped. The delay is because of the government’s restrictions on large gatherings. Everyone wants to feel safe, so we are delaying filming. Everyone is dealing with the situation as best they can, and we are exhibiting great team work. It’s a good thing!”

This article is written by Huynh  for JayneStars.com.