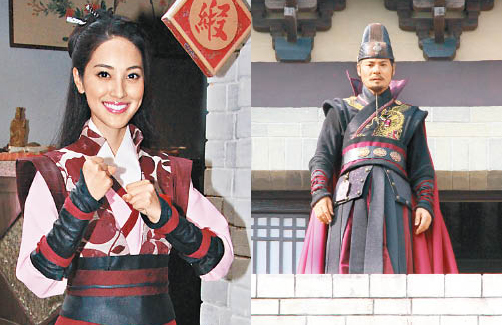 Reviews for the TVB drama Brother’s Keeper 2 <巨輪II> aren’t doing too good, and Grace Chan (陳凱琳) is facing the brunt of it all.

Brother’s Keeper 2, sequel to the 2013 television drama of the same name, sees Edwin Siu (蕭正楠) and Kristal Tin (田蕊妮) reprise their roles as the owners of Macau’s famous bakery chain, Lo Son Kei. Grace Chan is a new addition to the cast, starring in the role of Edwin’s love interest.

While Brother’s Keeper 2 is facing heavy criticism for its boring storyline and uninteresting characters, Grace is also getting slammed for her poor acting. Admitting that she has read some negative comments by netizens, Grace said, “I am unhappy. I worked really hard for the role. But I have to take this one step at a time. I can’t just change overnight.”

Pointing out that her character, Nana, will get raped by her adoptive father, Grace said with a laugh, “I’ll make sure to watch that episode when it comes out.” (You’ve portrayed quite a few characters that have been raped.) “It’s usually just mentioned, but not shown to you. All my characters have been quite different. Even my costars were different! I don’t think my roles are being repetitive.”

In regards to the news that the average viewership for Brother’s Keeper 2 has dropped to below 23 points, Grace said, “Yes. I admit I was a bit bothered by it at first, because I wanted more viewers to see it, but it’s hard to predict ratings. There are many options now, such as watching it online. I will encourage myself. What’s more important to me is my improvement.”

The busy filming schedule of her new drama, Wulin Revival <翻生武林>, has helped her forget about the criticism temporarily. Grace said she only has a few days left of filming, and is looking forward for her break.

Mentioning that her boyfriend, Kevin Cheng (鄭嘉穎), has just finished the filming of his last TVB drama Lost <迷>, Grace said they may go overseas together for a short vacation.

Ben Wong Too Shy to Reveal His Butt

Wulin Revival, a comedy drama that takes place in the Ming Dynasty, stars Edwin Siu as a lazy Shaolin apprentice who eventually finds his way to become a powerful fighter in the wuxia community. Ben Wong (黃智賢) and Grace Chan star as members of the Jinyiwei, the imperial secret police.

On yesterday’s set, the cast shot a scene that involved Ben revealing to the other characters that he is actually a castrated man, and pulls down his pants. When speaking about the “explicitness” of the scene, Ben said, “There are restrictions on television, so we can’t go too far, of course. You’re just going to see my thighs.” (But Raymond Lam has revealed his butt before!) “It’s not original enough! But I never had the need to reveal my butt on camera before. I am shy!”

Having to film a period drama in the hot summer weather, John Chiang (姜大偉), who stars on the show as Ben’s mentor, said the heat took a toll on the cast’s health. He points out his wife has also developed shingles like Edwin.

“What an unfortunate coincidence,” said John. “However, unlike Edwin, my wife didn’t discover them until much later on. She had to be hospitalized for a longer period of time. She’s feeling a lot better now, though sometimes she’ll feel pain. I feel pain with her!” (Spend more time with your wife?) “Yes. After I’m done with this drama, I have about ten days before I start my next one.”