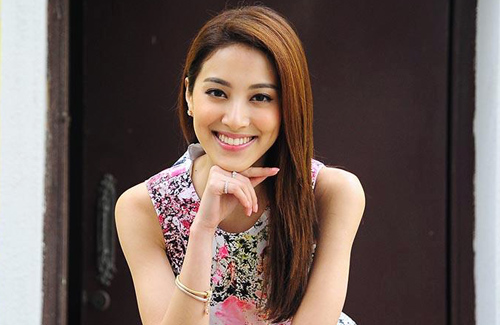 Dating for over a year, 24-year-old Grace Chan (陳凱琳) and 46-year-old Kevin Cheng (鄭嘉穎) are extremely compatible despite their large age gap. Due to Kevin’s maturity, he often gives Grace advice and provides her with a sense of security.

Since winning Miss Hong Kong 2013, Grace was highly promoted by TVB and cast in numerous dramas. Starring in a prominent role in vampire thriller Blue Veins <殭>, Grace was quickly drawn to Kevin and the pair started dating in February last year.

Grace revealed that she initially thought Kevin would be strict with newcomers and would not be pleased by her acting. However, as Grace spent more time with Kevin, she learned that he was extremely patient and often gave valuable acting advice.

Their mutual attraction grew and romance happened naturally.  Due to the timing of the filming of the drama last year, Grace and Kevin spent New Year, Lunar New Year, and Valentine’s Day together. Filming on location in the Netherlands for Blue Veins allowed Grace and Kevin to be in close contact with each other. Grace shyly disclosed that even their co-star, Anjaylia Chan (陳嘉寶), noticed something was going on between her and Kevin even before their relationship became official.

Grace laughed, “Everything that has happened so far was due to fate! No special planning was involved.”

Despite their 22-year age gap, Grace and Kevin stated that age is only a number and that they have no problems communicating with each other. “In the past, I didn’t watch sports programs. When he explained [the moves] to me, this sparked my interest. I’m learning how to play tennis now. When we go out together, he accommodates me in every way–he lets me decide what we eat and where to go. He basically never says no!”

Grace explained, “He knows that I’m a private person and doesn’t like to share, but he always manages to coax me into confiding in him so we can analyze it together. He would also tell me about his past – including his time in Taiwan. I don’t want to learn about him from news outlets; I find it more reliable when the information directly comes from him.”

With age comes a greater level of maturity, which was what had initially attracted Grace. Kevin gives her a sense of security, more than what she finds from other men she knows.

Similar to any couple in a serious relationship, Grace and Kevin have already discussed the topic of marriage. Even if she were to get married, Grace said it would not affect her career.

Grace said, “He said whatever I decide to do in the future, he’ll support me. We have an understanding and think it’s best that everything comes naturally! I think it’s very sweet that he loves children, especially coming from a guy!”