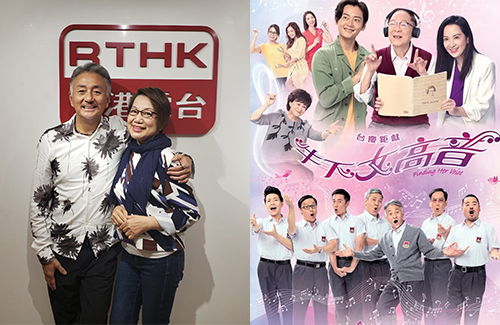 On RTHK’s radio program Those Were the Days <舊日的足跡> to promote his new TVB drama Finding Her Voice <牛下女高音>, veteran actor Hugo Ng (吳岱融) chatted with DJ Candy Chea (車淑梅) about prolific onscreen career, from his early idol days with TVB to filming Category III films in the early 90’s. He also talked about his Finding Her Voice costar Jacqueline Wong (黃心穎), who has been effectively banished from the entertainment industry due to her cheating scandal with Andy Hui (許志安).

Despite her negative image, Hugo praised Jacqueline greatly and professed that he admires her as an actress. Hugo explained that Jacqueline is a very smart girl who was able to quickly find her chemistry with Finding Her Voice lead actor Owen Cheung (張振朗). 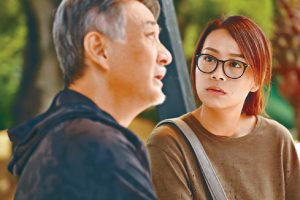 Hugo Ng with Jacqueline Wong in “Finding Her Voice” (2019)

As for the news alleging that Jacqueline plans on quitting the entertainment industry, Hugo said, “It’s hard to say. Nothing is final. Truthfully, I think these are two different things that can’t be put together. Our private lives and our careers should be taken separately.”

Candy Chea asked Hugo if he believed that Jacqueline should quit, to which he said, “That is her business. We’ve all made mistakes before, that’s why it’s important to have a forgiving heart.”

After leaving TVB in the early 90’s, Hugo took part in several Category III films that required Hugo to strip on screen. He said, “I was an idol who suddenly decided to do Category III films. I exposed everything. Many people asked me if it was because I needed money, but I am a very dedicated person. If the script calls for it, I will do it. Actually, it was my wife (Lily Chung 鍾淑慧) who agreed to do the film first, and I only accepted it after her. That comforted me. Honestly, I wouldn’t like it if my wife had to expose herself too. She was still my girlfriend at the time, but I respected her choice.” 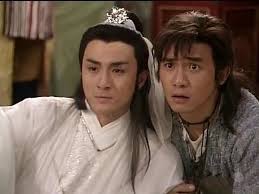 Hugo Ng with Tony Leung for “Two Most Honorable Knights” (1988)

According to Hugo, he was the one who suggested to go full-frontal for the film. “It made sense for the character, and I did my best. It was a rare opportunity for me. I didn’t do those films because I was struggling. I did them because it was in line with my thinking.”

Hugo and Tony did not become friends after the collaboration. Hugo said they were two completely different people with clashing personalities. Nonetheless, he praised Tony for his intelligence and quick-thinking; he also did most of his own stunts. “Tony was very mature for his age at the time. He understood the industry. As for me, I was thin-skinned, introverted, and very shy. I didn’t have a large social circle.”