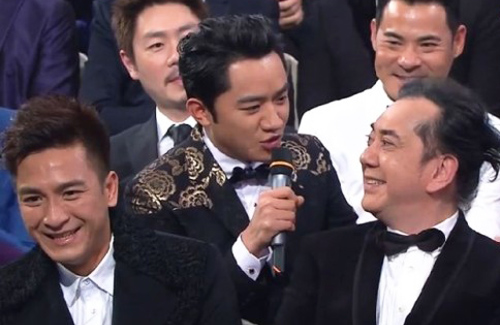 Although in the running for Best Actor at the TVB Anniversary Awards for five years, Kenneth Ma (馬國明) failed to receive the award for his role in Lord of Shanghai <梟雄>. Many expressed sympathy for Kenneth, especially since it was Kenneth’s fifth time being nominated for the award.

The closest that Kenneth came to winning was in 2012, when he was nominated for his well-received role in the popular drama, The Hippocratic Crush <On Call 36小時>, but he was unfortunately lost out to Wayne Lai (黎耀祥).

As Kenneth was nominated this year, but again lost, netizens dubbed him as “TVB Anniversary Awards Professional Sidekick”. However, some netizens pointed out that while Kenneth did not win TV King, he had received many valuable career opportunities which allowed him to film enviable intimate scenes with many A-list actresses. The netizens cited Kenneth’s scene with Alice Chan (陳煒兼) in Lord of Shanghai as an example.

Kenneth may be comforted to know that he is not the only artiste who has been consistently nominated and failed to win. With a similar plight, Linda Chung (鍾嘉欣) has been nominated for TV Queen six years in a row but has failed to obtain the award each time. Some netizens pointed out that Linda’s acting is actually decent, but she has not received a role in which she could truly demonstrate her potential. Another netizen, in a tone that bore a mix of encouragement and mockery, commented that Ka Hung Wei (韋家雄) waited for 20 years before finally receiving his Best Supporting Actor award, implying that Linda still had time to wait.