While attending the University of California, Los Angeles (UCLA), Bruce and Chris were part-time models and expressed interest in joining the entertainment circle. But their father, Kent, asked them to finish college first and take courses in film studies.

How They Landed Their First Movie 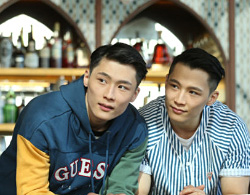 Kent had considered opening his own studio to help his sons make their debuts. But the twins’ mother, former ATV actress Keung Kwan (姜坤), is close friends with Donnie Yen’s wife, Cecilia Wang (汪詩詩). When Donnie was filming Big Brother, he needed young actors to star as students in the film. “Through his wife, Donnie asked our mom if we were interested in filming a movie. Mom felt it was a great opportunity and immediately asked us to return to Hong Kong for auditions.” The twins impressed Donnie and ended up signing under his management company.

Portraying twins in Big Brother, Bruce and Chris had a fight scene together. The director felt their scene was too rehearsed and asked them to be more explosive. The brothers laughed and said they did not have a fight in a long time, and got carried away in the scene. Bruce said, “The director was satisfied with our scene, but we couldn’t stop fighting. The director yelled at us to calm down. Afterward, we felt it was a very amusing experience. We were very involved in the scene. Chris and I haven’t fought in over ten years; usually we just don’t talk to each other.”

Born only two minutes apart, Bruce and Chris are very close to each other. But like most brothers growing up, they fought over everything–whether they were toys or video games. The longest time they did not talk to each other lasted two months.

In Form Four, the boys played a basketball game with friends and had a dispute. After punching his younger brother’s nose, Bruce immediately regretted it. “Chris’ nose got crooked and he had a huge nosebleed. Our classmates were scared and called the ambulance. I couldn’t sleep all night. I thought Chris would die, and there won’t be anyone to be with me anymore. After breakfast the next morning, we visited Chris at the hospital. Dad yelled at me and shelled out money to fix Chris’ nose.” After this scare, Bruce learned to cherish Chris and no longer had any more fist fights. Bruce laughed that after the surgery, Chris’ nose became better looking.

When asked if the brothers like the same type of girls, Bruce said he preferred quiet and good girls. Although he has not dated for awhile, Chris said he needs to feel a connection with the girl. Asked if they will date twin sisters, Bruce and Chris laughed and said they have not tried it, but many people made the same suggestion.

Since they were little boys, Bruce and Chris visited their father on his filming set. “Dad had a big influence on us. He really wanted us to enter the industry. Slowly, our interest in acting grew.”

After filming Big Brother, Bruce filmed a web series with Kent in Beijing. “Dad said the role suited me and asked the director to cast me. Dad said it’s important to try different roles in the beginning, whether it’s a big or small role. In the ancient drama, I portray a good character while Dad is a villain. Dad has high expectations. Although the director was satisfied with my scenes, Dad thought I could do better and asked them to be re-shot. Dad’s eyes are very expressive. Finally, I have a chance to learn from his acting.”

Although they are still living in Kent’s house, Bruce and Chris set goals to become financially independent. “We’re starting to earn money and don’t need Dad to give us allowances anymore. He cut our credit cards already. We can pay for our own expenses. Our next goal is to eventually be able to support Dad.” 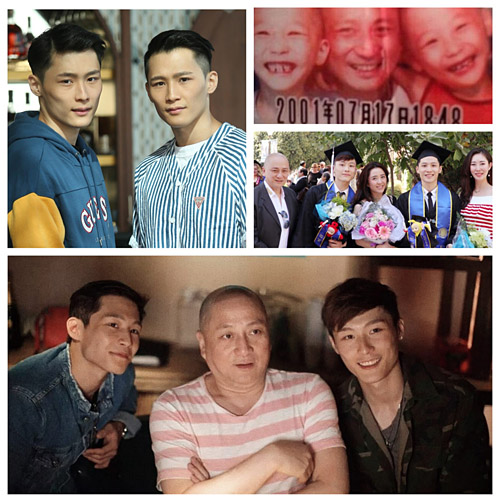