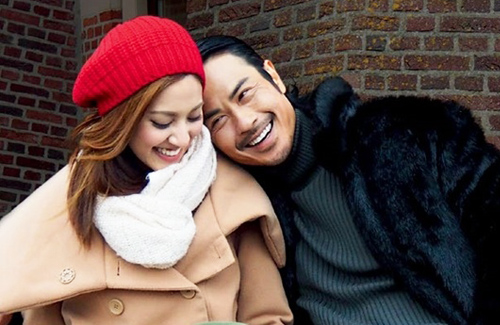 After romantic rumors surfaced during their collaboration in Blue Veins <殭>, Kevin and Grace were both quick to state they were only friends. Although Grace was photographed entering Kevin’s apartment, Kevin explained she was only there to borrow DVDs.

However, after the cast’s filming trip to the Netherlands, Kevin and Grace’s relationship seemingly solidified, making them more open to reveal the true status of their relationship. Without hesitation, Kevin said, “We had a lot of time to get to know each other and we both feel very comfortable when we talk to each other. She is someone who has a great personality. I really admire this girl. I’ve said it before – I need to get married and have children. Please give us a little space for dating.”

Kevin added, “When there is time, I would like to go out for dinner or the movies together, so we can understand each other more. I have to let her learn more about me first.”

Besides complimenting Grace on her unpretentious personality despite coming from a fairly wealthy family, Kevin said their large age gap does not affect them at all. Kevin expressed, “She has a lot of wisdom. Perhaps because we were both educated overseas, we have adapted a more Western mentality and are able to communicate easily. We both enjoy movies, TV shows, and foreign talk shows. We have conversations about a lot of topics.”

Grace also reiterated that age is nothing but a number and believes it should not be a factor that affects a couple. “I don’t think age gaps are a set back – even if the woman is older than the man, it’s not a problem. In order to be friends, the most important thing is to look at their personality and see how they treat others.” Complimenting Kevin for his thoughtful personality, Grace revealed that Kevin treated older artistes such as Helen Law (羅蘭) with respect and often treated the cast to snacks.

Since Kevin indicated his interest in asking her out on dates, Grace did no mind spending more time together, “Sure, if there is time. We are good friends.” She added that she did not see dating as a conflict to her acting career, “Even if I were to date in the future, it is good to share problems with my boyfriend and support each other. This will help my career too.”