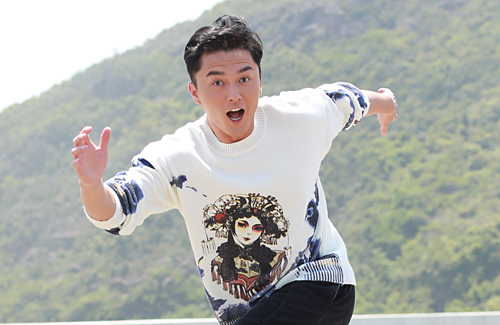 In a stable relationship for four years, Mat Yeung (楊明) and Lisa Chong (莊思明) are not in a hurry to get married. The actor is shocked by his mother’s suggestion that he has children first before marriage, hoping that would expedite the couple to act faster.

“We want to focus on work for the time being and are not in a rush. My mom turns out to be more worried and even asked why not have a baby first, and marriage can come later. I was shocked and wondered when she became so open? I’m a very traditional man and would progress step by step, but once we get married we’d plan for a child quickly as we both love little kids,” Mat shared.

It is understandable why Mat is not in a big hurry to get married, as he is focused on managing his restaurants when he is does not have a filming project. In 2018, Mat and a few partners started an eatery business named STEW. Due to the impact of COVID-19 on the local food and beverage industry, their plans to open two more outlets this year were derailed.

While Mat had previously left the business management aspects to his partners and only involved himself in food quality and marketing, he recently started delivering takeouts to customers personally to meet the increased demand. “Since I was free sometimes and could deliver goods with the car, I tried to deliver food so customers wouldn’t get disappointed from too long a wait. When I arrived, I realized the customers were really happy–they would request selfies and express their support. I hadn’t expected such a simple gesture to bring positive energy. Now I would personally do deliveries when I have the time and hope to create some joy.”

In his recently aired drama Airport Strikers <機場特警>, Mat appeared very fit in his topless scenes. To train for these scenes, Mat forced himself to run nightly and controlled his diet strictly to tone up.

While the production team thoughtfully gave the cast a month to prepare for their topless scenes, everyone involved including Mat was nervous about a topless jogging scene on the mountains, which was a routine of the airport strikers unit. “I don’t like to run, but running is the fastest way to slim down, so I would force myself to jog on the streets every night after work, from three kilometers [two miles] at first to 10 kilometers [six miles] later on. I would also lift weights after getting home before resting. But I stopped all training after filming because running is really boring,” Mat shared. 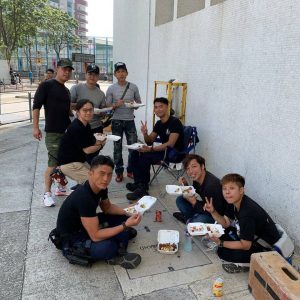 Describing his restrictive diet during filming as “close to fasting,” the 39-year-old stuck to a restricted diet of chicken and egg whites, which he had to spice up with dashes of pepper as he found it “tasteless from the third day onward.”

Immediately after filming all the topless scenes on set, Mat felt relieved and ordered two boxes of his favorite cha siu rice.

In Airport Strikers, Mat has a pretty girlfriend played by actress Regina Ho (何依婷), while his real-life girlfriend Lisa made a special guest appearance. Veteran actress Rainbow Ching (程可為), who played Mat’s onscreen mother wanted to pair him up with Lisa’s character, and got her to turn up one day. Wearing geeky glasses and braces, Lisa surprised Mat with her nerdy image. “The producer only told me she would make a guest appearance, but did not specify which role, and also told her not to reveal her image to me. Until the day of filming, I did not recognize her at once, and I started laughing out loud when I finally recognized her…it was supposed to be my character’s first time seeing her, but I could not stop laughing and and it was a real challenge to convey my dislike.” Mat shared.