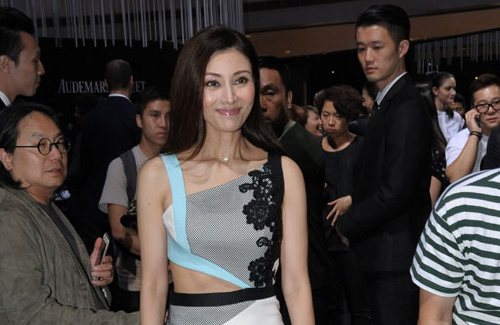 Appearing at an event recently, Michelle Reis (李嘉欣) did not shy away from speaking about her son, Jayden Max Hui, at the glitzy event. Michelle mentioned that Jayden has started K2, his final year in kindergarten and laughed, “We were both looking forward to him going back to school!”

Michelle added, “We are reusing his school uniform from last year and also making him use up his pencils, as we want to teach him to be environmentally conscious.”

On whether Michelle had found a primary school for Jayden, she said, “Not sure yet, as there is still one more year and I have several different options.” As to whether her son would attend an international school, she said, “I’m fine with either…what’s most important is that he gets a good character education.”

Michelle then revealed that she would normally discipline Jayden and had also hit him for being naughty. She recounted an incident, “He had this habit of shaking his leg and I really hate that. I started by first gently telling him not to do it. But he continued to shake it, so I gave him a smack on the leg.”

On whether her husband, Julian Hui (許晉亨) minded, Michelle said, “He usually keeps his views to himself, unless it involves our son’s daily schedule. He usually urges me to give Jayden more television time.” Michelle then admitted, “Sometimes I nag and nag until even Julian will tell me to stop nagging!”