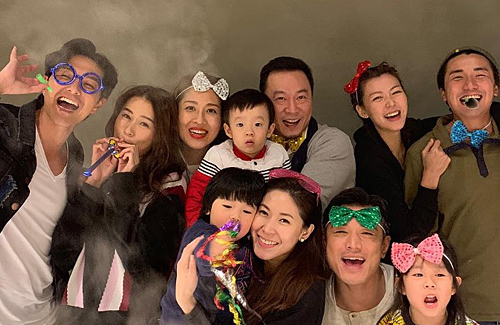 On New Year’s Eve, Sharon Chan (陳敏之) brought her husband and two-year-old son to her friends’ party. Other couples there were in Edwin Siu (蕭正楠) and his wife Priscilla Wong (黃翠如); Stefan Wong (黃致豪) and his wife, and Tony Hung (洪永城) and his girlfriend. The friends rang in the New Year together and partied until 3 a.m. The next day, Sharon’s son, Eddie, came down with a high fever and the flu, making her very anxious over her son’s sickness.

Feeling guilty in taking the family out so late, which led to her son’s fatigue and eventual high fever, Sharon shared her feelings on social media, “My heart sank to the bottom. My baby had a high fever all night. His face was very red, and the fever hasn’t gone down despite taking medication. After seeing the doctor today, he was diagnosed with flu. My heart feels like it was knifed. It’s Mommy’s fault in taking you out until so late, in which you didn’t get enough rest and got sick. Seeing you suffer, I feel very guilty and responsible. Hope you get better soon. Mommy will bring you to see cars.” Fans tried to reassure Sharon and said it was not her fault.

Since giving birth two years ago, Sharon has noticeably decreased her work load to spend more time with Eddie. In a previous interview, she had said, “If something were to happen to my son, I wouldn’t want to live anymore. His life is very important to me. If there is a mishap because of a little mistake, I would go crazy!” Because of her anxious nature over Eddie, it’s understandable why Sharon felt guilty after he came down with the flu this time.