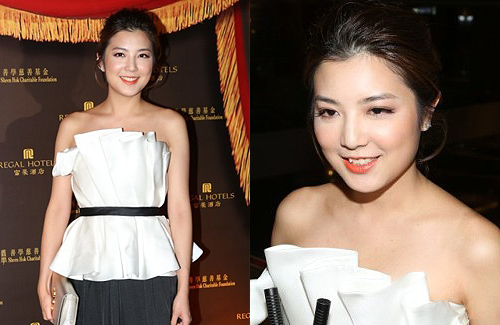 Former Miss Hong Kong 2016 participant Phoebe Sin (單文柔) has been making recent headlines due to her romance with Ruco Chan (陳展鵬). After their relationship was exposed, Phoebe seems to have gotten many more job opportunities as well. Phoebe admitted, “It does have something to do with Ruco. More people know who I am now. However, I hope people will know me for my work and not my personal relationships.”

In addition to continuing to film for children’s television shows, the 26-year-old is also scheduled to host a new variety show about interior design. With Phoebe’s interest in filming for dramas, will Ruco help pave the way for her to film a series? Phoebe said, “That’s not possible. If I do not have a strong foundation, even if he coaches me, I still will not have the forte for it. I need to do well in my current work first. If not, I may not even get an opportunity.”

Even if he has not helped her secure a role, has Ruco shared any tips on acting with her? “Right now, they are airing The Unholy Alliance <同盟>! We talk about the storyline and things related to filming.”

In the drama, Ruco has many intimate scenes with his past rumored costar, Nancy Wu (胡定欣), in the drama. Did any of the scenes make Phoebe jealous? “No! They have a very tacit understanding of one another. They are compatible in their action scenes. Ruco is very different from his character in the drama. He is more handsome in the drama!”