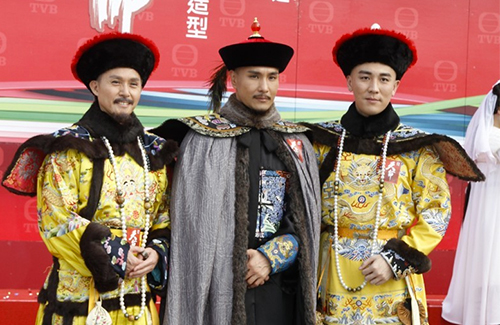 The cast of new TVB Qing dynasty drama Heaven’s Will <天命> gathered together yesterday for a costume fitting press conference. Produced by Chong Wai-kin (莊偉健), Heaven’s Will centers on the corrupt imperial official Heshen, and the events that took place in the 28 days leading up to his death on February 22, 1799.

Heshen, known as one of the most corrupt officials in Qing dynasty history, became a famous figure in entertainment after Wang Gang (王剛) famously portrayed the character in several Chinese television dramas of the early 2000’s, most notably in The Eloquent Ji Xiaolan <鐵齒銅牙紀曉嵐> series. His popular portrayals have led many to associate Heshen as a plump and comical man. Ruco said, “I was surprised when I first heard of my casting. Isn’t Heshen supposed to be stocky and clever? But historical records say he actually looked sophisticated and elegant.” (Have you seen Ji Xiaolan?) “I have when I was younger. We’re going for a completely different style. [Ji Xiaolan] was more light-hearted, while we’re going for a drama, and closer to history.”

Whereas Heshen would be treated as a stock side villain in previous historical dramas, Heshen will take focus in Heaven’s Will, with its main story detailing the events that took place in the 28 days before his death. “It will talk about his poor relationship with Jiaqing, as well as answer the question to how Heshen got so powerful,” said Ruco. “How did he achieve so much? How did he amass such a great fortune?”

Ruco’s Heshen will have several love interests in the show. Selena Lee portrays his first love, but she will marry Shaun’s Jiaqing instead, and later becoming his empress. Heshen will also be involved with Elaine Yiu’s Changmei, the western-educated daughter of an official. Selena teased about her character’s tragic story, and said she is mentally prepared for the role. The Presumed Accidents <純熟意外> actress is most excited to work with Shaun, who spent the past few years playing supporting parts in Mainland Chinese television dramas.

Shaun shared that he recently signed a management contract with TVB, and plans to focus his career in Hong Kong for the next few years. He admitted that his reason for doing so is because he wants to spend more time with his one-year-old daughter.

Principal photography for Heaven’s Will begins this December, based in Hong Kong, and will run through April 2017. Photography will continue at Hengdian World Studios and the Great Wall of China next year.