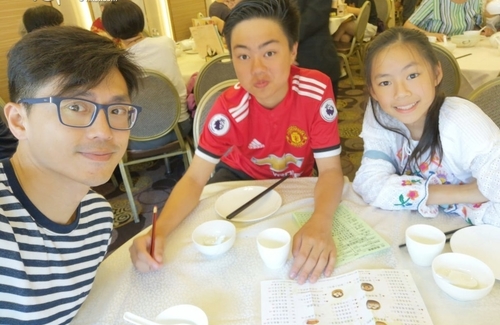 With school about to commence, Sammy Leung (森美) bragged that his 16-year-old son Yi Le (梁曦樂) recently got 11 A’s on the GCSE. The proud father couldn’t be any happier. “I’m proud of you!” Sammy expressed. “I hope that my son, who will return to the UK tonight, will continue to work hard during the next two years for the A-level college entrance exam.”

Hard Work Would be Rewarded

The DJ revealed that his son previously attended the St. Paul’s Co-educational College in Hong Kong, but the competitiveness put Yi Le under immense pressure. The child’s self-confidence was at an all-time low and he often doubted his ability to study well at the school.

However, Yi Le was able to make a big leap forward in his studies after he went to the UK to further his studies. It happened because of his own efforts and without the help of his parents, so it greatly boosted his confidence. Sammy said, “I told my son that you would be rewarded as long as you work diligently. This exam will let him know that he is capable of doing well.”

Sammy and his wife, Veronica Chan (陳雅嫻), were initially worried Yi Le would not be able to catch up since he skipped a grade when he went to the UK to study. Moreover, he was studying 11 subjects like most Hong Kong and Chinese students, whereas UK children usually take on nine or 10. But Yi Le proved his capability when he got all A’s, which was surprising as his son’s performance on the mock test was underwhelming.

“My only request for my son is that he does his best,” Sammy shared. “Even if he fails, he can reflect on what he is lacking.”

Yi Le is gaining interest in politics lately, so he is aiming to study Philosophy, Politics, and Economics (PPE) at Oxford. If he successfully enrolls, he will become the junior of the former British Prime Minister David Cameron and Nobel Peace Prize winner Malala Yousafzai.

Sammy’s son also intends to study subjects related to poison, as he is obsessed with reading the history of poison recently. Although Sammy thinks it’s a little scary, he would not object if Yi Le enjoys it.

He also hopes that once his son graduates from university, Yi Le will return to Hong Kong for a family reunion, but he will let Yi Le decide at his own discretion.