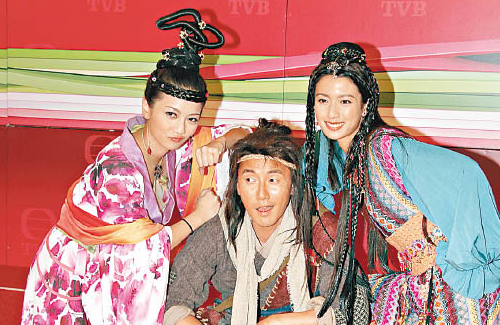 While the new drama centers on cooking, Tony jokingly admits that he has absolutely no talent in the kitchen. When asked if he is able to at least cook for his girlfriend, Natalie Tong (唐詩詠), Tony revealed, “I’ve made her steak and pasta before, but she didn’t really like it.” Asked if Natalie’s cooking is better, Tony said, “Her nickname is NatNat, of course she’s great at it. She made me grilled salmon and she usually cooks Western dishes. I hope to take lessons and challenge her.”

On working with Sisley, who is a rumor-magnet, Tony shrugged and said he is not concerned. Always keeping an optimistic view despite being surrounded by gossip, Sisley said she would treat any rumors as free promotions for the drama.

In related news, Stephanie publicly uploaded a photo on her blog last night, showing off her tall, handsome boyfriend of Korean-Chinese decent.