Sweet Scenes in “The Legends” 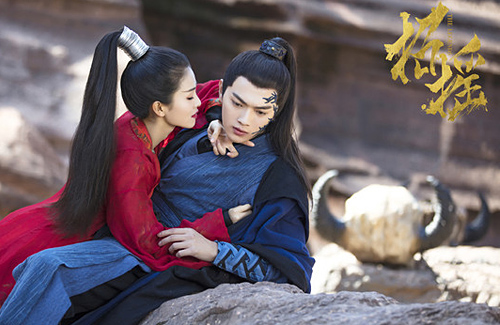 Mainland Chinese drama The Legends <招摇> is currently rising in popularity and receiving positive reviews, as viewers rave on the compatibility of the main couple, their attractive looks and sweet dialogues.

Starring Story of Yanxi Palace‘s <延禧攻略> Xu Kai (许凯) and actress Bai Lu (白鹿), The Legends is adapted from a Chinese novel written by Jiu Lu Fei Xiang (九鷺非香), who also serves as one of the scriptwriters. In The Legends, Xu Kai portrays the demon king’s son Mo Qing. Cursed with a tragic fate, he was locked in a cave for several years, until he got released and saved by devil sect leader Lu Zhaoyao (portrayed by Bai Lu). Since then, he fell in love with Zhaoyao, and continuously protects her during times of hardships.

Viewers find it humorous that the female and male characters seemed to have switched gender roles, as Xu Kai’s character is shy while Bai Lu’s character is bold and charismatic in their romantic scenes. In the latest episode when the couple finally gets to date, this had fans’ melting at the sight of their sweet scenes, and even called them to just “Marry on the spot already!’”

Many of Xu Kai’s sweet lines include: “I’ll protect Lu Zhaoyao” and “In my heart, she is the one and only.” Another golden line that got many fans smiling was seen in a recent episode, when the couple were holding hands and walking around the night markets. After being calmed down by the female lead due to the sight of a competitor contending with him for Zhaoyao’s love, he shyly held her hands and said, “I really want to hide you in my pocket right now!”

Surely, with about 20 more episodes left to air, viewers can continue enjoying Xu Kai and Bai Lu’s amazing chemistry in The Legends.

5 comments to Sweet Scenes in “The Legends”