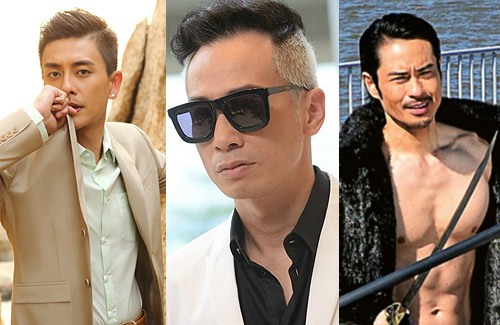 Besides the popularity of Korean dramas, many Hong Kong viewers are turning their attention to Mainland and Taiwanese artistes. Hoping to retain viewers’ hearts, TVB decided to revamp their actors’ images and make them into more appealing “male gods” in upcoming dramas.

Although Bosco Wong (黃宗澤) has maintained a positive image in television dramas in recent years, he will showcase a new side of him in suspense thriller, Two Steps from Heaven <幕后玩家>. Playing one of the three villains in the series, Bosco is a ruthless playboy who juggles relationships between Katy Kung (龔嘉欣), Priscilla Wong (黃翠如), and Moon Lau (劉佩玥).

Bosco expressed, “My character can’t get more villainous than this – he has absolutely no morals and only has eyes for his career. He also has many mistresses.”

Trapped in a cave for over a decade, Roger’s only mean of survival was to eat whatever was available to him – including frogs. Besides devouring frogs for his new series, Roger underwent an intense diet and lost almost 20 pounds for the role. With Roger’s new role – TVB hopes to win audiences’ hearts with the character’s sad backstory.

Taking a spin on the typical time-travelling theme – Vincent Wong (王浩信) and his onscreen partner Tracy Chu (朱千雪) travels back in time for over a dozen times to save the world in Over Run Over <EU超時任務>. Playing the comedic village leader with an old-school accent, Vincent hopes to generate laughs and joy among viewers.

Although 44-years-old, Moses Chan (陳豪) proves that he can still rock the stylish suit and platinum blonde highlights in Fashion War <潮流教主>. Ditching his cutthroat fashion editor image, Moses turns into an intelligent scientist in new fantasy drama My Lover From the Planet Meow <來自喵喵星的你>.

Laughing at his drastic hairstyle change from Fashion War, Moses joked, “I believe that my new hair in the upcoming series will be more liked than the last!”

Following the popularity of vampire-themed series in Western countries, TVB produced Blue Veins <僵> and cast Kevin Cheng (鄭嘉穎) as a 500-year-old vampire slayer who develops feelings for Grace Chan (陳凱琳). Initially a human girl, Grace slowly begins to harbor a crush on Kevin and hopes to turn into a vampire in drama .

Last but not least, wrapping up the 2016 line up is Bobby Au Yeung (歐陽震華) who will try to win viewers with his cheerful performance in House of Spirits <一屋老友記>. Although the series has a supernatural element, Bobby reassures his fans that House of Spirits is far from scary. In fact, he hopes the drama brings nothing but joy and laughter to Hong Kong families.