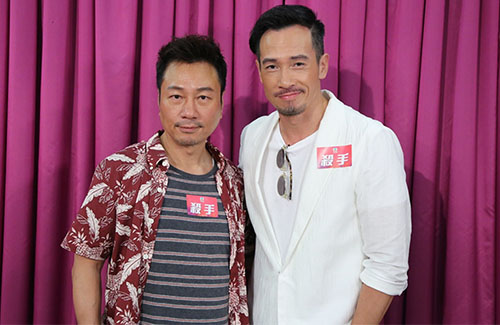 “I used to be very able and fit, but that was 20 years ago,” shared Wayne with a laugh. “That’s why I have a belly going on right now.”

Moses plays a seasoned sniper with 100 percent accuracy. Ali plays a struggling single-mother-turned-accomplice who helps Moses deal with the aftermath of his killings.

“I do quite like this story,” said Moses. “This show will talk about what assassins actually are — and it’s not just about how they kill people. For example, assassins do contract killings. Assassins cannot kill each other for revenge. There’s a lot more to say.”

Wayne said, “This drama is leaning more towards the realistic side of things. We are all humans after all. This show won’t be like how media portrayed assassins in the past. We still need to live our lives. We still need food on our tables.”

As both Wayne and Moses have been accepting more jobs in the mainland, the duo were asked if they now do only one TVB drama per year. Wayne said, “Actually, that’s not really true. No numbers were specified. If there’s a job for me, I’ll be there. Of course, I will never leave Hong Kong. I am a Hong Konger, a Hong Kong actor. I think it’s important to keep true to our culture in these dramas. We need more Hong Kongers to film more Hong Kong dramas for the people. This will never change.”