Time and time again, Wayne Lai (黎耀祥) and Sheren Tang (鄧萃雯) stunned viewers with their undeniable on-screen chemistry and award-winning performances in the popular dramas Rosy Business <巾幗梟雄> and No Regrets <巾幗梟雄之義海豪情>. Touted as an iconic duo, Wayne and Sheren surprisingly do not share the close-knit relationship that the media has dreamed up for them. Wayne recently disclosed to his More Than Mall <雙祥見> variety show co-host Louis Yuen (阮兆祥) that he doesn’t know Sheren too well. 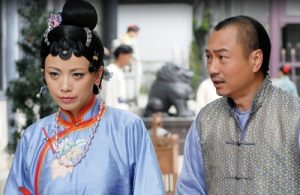 Sharing the real dynamics of his relationship with Sheren, the three-time Best Actor said, “We never collaborated before Rosy Business. We only saw each other and knew of each other. When we filmed Rosy Business, we didn’t talk much and only practiced lines together. We would just leave after the shoot, so there was no interaction. I think it is weird that we are the best partners; we were very compatible in the drama.”

He believes that they became a little more familiar with each other when they filmed No Regrets. He said, “We have no problem with chemistry on screen, but I just prefer to talk more [when the cameras are not rolling]. Best partnerships are based on fate. Like I was saying, although we don’t communicate much, people think we are still very compatible on-screen.”

However, Wayne is even more compatible with his wife, who is also his manager. He disclosed that he lets her handle all his finances. Unlike Louis, who thinks it is appropriate for a significant other to know that he has private money but would never disclose how much, Wayne said he doesn’t believe in private money. Wayne said, “[My wife] controls my money, so I can’t have private money if I wanted to, but it wouldn’t be surprising if she had private money.”