Yang Mi Heads Straight to the Salon After Her Flight 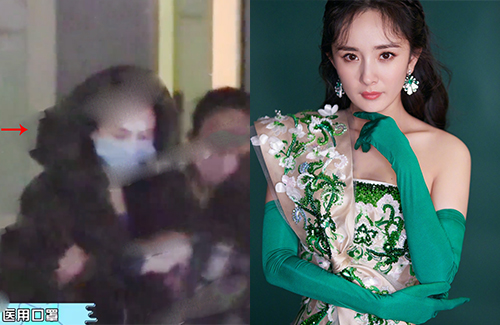 It’s definitely not easy to be a celebrity!

Yang Mi (杨幂) arrived at the Beijing airport moments after midnight on Wednesday, but despite the early hours, a large group of fans were still stationed at the airport, welcoming their idol. Although Yang Mi was wearing a thick down coat with her face covered up, fans still recognized the actress and screamed for her. Yang Mi nodded, waved back, and held their hands.

Yang Mi and her staff left the airport through a VIP exit. Instead of going home, Yang Mi went to a beauty salon for a skincare treatment. With her female assistant beside her, Yang Mi entered the salon through a side entrance.

Several hours later, Yang Mi left the salon through the same exit. One assistant stood in front of her, and another stood behind to make sure they weren’t being followed. Yang Mi was seen with medical tape on the T-zone of her face, and her face mask was changed to a white, surgical one. It appears that Yang Mi had completed some treatments on her face, and like what rumors are saying, maybe she has just undergone cosmetic surgery.