Amy Kwok Once Kicked Sean Lau Out of the House 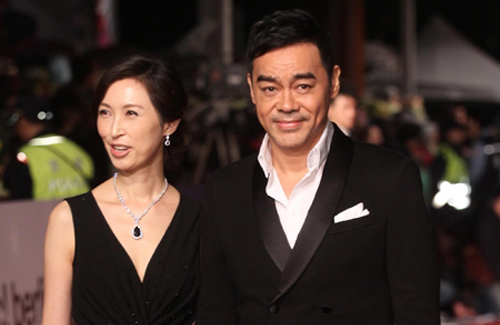 Sixteen Best Actor nominations and eight years later, Sean Lau (劉青雲) won his second Best Actor win at the 34th Hong Kong Film Awards on April 19. Married to former Miss Hong Kong Amy Kwok (郭藹明) for 17 years, the couple appears to have the ideal marriage. However, Sean has a fiery temper and in one of their marital fights, Amy kicked him out of the house.

Winning Best Actor for his performance in Overheard 3 <竊聽風雲3>, Sean thanked his family for supporting him through the years. He was emotional when he thanked Amy for keeping him grounded in their marriage.

Amy has always been an important figure in Sean’s life. They met on the set of TVB drama The Greed of Man <大時代> in late 1991. However, the two did not start dating until two years later, when their The Greed of Man costar Vivian Chow (周慧敏) brought them together again. Sean and Amy married in 1998  fellow actors Francis Ng (吳鎮宇), Anthony Wong(黃秋生), Wayne Lai (黎耀祥), Cheung Tat Ming (張達明), and Dayo Wong (黃子華) were the groomsmen.

Since their marriage, Amy has gradually retired from acting. Opting not to have children, Sean and Amy believe that one of the secrets to a happy and long marriage is mutual trust. “No matter what happens, we have to talk about it with each other first. We shouldn’t find out what happened from an outsider.”

In an interview, Amy had mentioned that she struggled with Sean’s fiery temper in the early years of their marriage, “ At first, I didn’t know why he would always get so upset. I wondered if I did something wrong. I kept asking myself why. But now I know. He has a very passionate personality. I’ll just leave him to deal with it.”

Despite Sean’s temper, Amy always has a way to control him. Sean confessed that he once made Amy so upset, she ended up kicking him out of the house. “I had to stay at my friend’s place for the night,” he said.

After each fight, Sean said he tends to be the one who gives in first. “There’s no other way. She’s not afraid of me. When it comes to her, I have no choice but to surrender.”

Sean praised Amy for being the perfect partner — well-educated, talented, and extremely intelligent. “She has a Masters in Mechanical Engineering. She can teach me English, horseback riding, and Mandarin. She also knows how to fix TVs!”