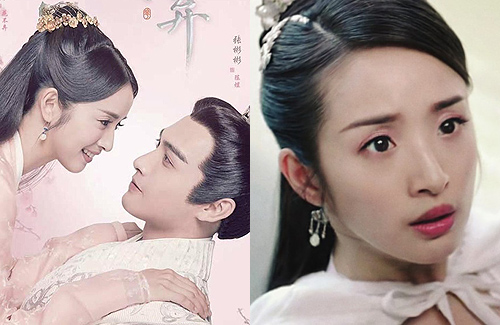 Fans of Ariel Lin can look forward to her performance in the upcoming iQiyi period drama.

It has been five years since her last period drama Prince of Lan Ling <蘭陵王>, and Taiwanese actress Ariel Lin (林依晨) is set to sizzle up screens with the highly anticipated wuxia drama Legend of Hua Buqi <小女花不棄> in January 2019. The youthful-looking 36 year-old actress imbues a cheeky and vivacious aura to her character Hua Buqi, and portrays not just the saccharine joys of first love but also deep patriotism and selfless passion for her country. In the drama, Ariel pairs up with Mainland Chinese star Vin Zhang (張彬彬) of Eternal Love <三生三世十里桃花> fame.

Based on a novel of the same name, the drama focuses on Hua Buqi, a wanderer who is approached by dubious characters who wish to exploit her for influence and benefits. Unfortunately embroiled in political and power tussles, Buqi and her ninth uncle are hunted by killers. Buqi escapes a tragic end thanks to a heroic rescue by a mysterious masked man, whom she develops good feelings for. On his deathbed his uncle instructs Buqi to go into the capital and look for a “Mister Zhu”.

Entering the capital, Buqi is taken in by Seventh Wangye as his “daughter”, but Buqi soon realizes that he is in fact her father’s murderer. In order to avenge her father, Buqi forges an identity as the daughter of the Jiangnan Zhu family, and through her intelligence and perseverance propels the family’s finances to become the richest in Jiangnan.

Through numerous encounters with Chen Yu (played by Vin Zhang), she realizes that he is her masked savior; romance quickly develops between the two. When Seventh Wangye’s ambitions of power are revealed, Buqi collaborates with Dongfangshi to thwart his plans. Buqi sacrifices love to save her motherland and Dongfangshi eventually defeats him, winning peace at last for the ordinary folks.

The Legend of Hua Buqi will premiere on January 8, 2019 on iQiyi’s platform.

“The Legend of Hua Buqi” Trailer