Known for her slim physique and delicate facial features, 35-year-old actress Yang Mi (楊冪) has starred in countless renowned dramas and is the face of several endorsements. The A-lister and mother of one was recently spotted by fans out shopping with friends, dressed in a pair of black leggings despite the sub-zero temperatures! 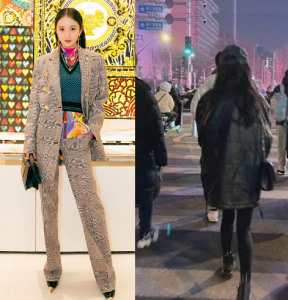 Dressed down in a black cotton coat and cap, fans identified the star from her chopstick-thin legs, and snapped photos of her out on the street and in a clothing store.

Netizens marvelled at how Yang Mi was dressed only in thin leggings despite the chilly climate recording negative seven degree celsius, and commented, “She’s the only one with such slim legs”, “Looks even thinner than men’s arms” and “Her figure is slim but not emaciated, she has boobs and buttocks,”