Gong Jun throws a blanket over his head while hostile fans yelled at him onboard a flight.

Chinese actor Gong Jun (龚俊) became an overnight sensation after the airing of Word of Honor <山河令> in February. His face can be seen everywhere in China, as he endorsed nearly 20 brands in the past four months alone. Due to his striking features and 6-foot-1-inch stature, Gong Jun is easily recognized everywhere he goes and has little privacy left, even when he is trying to rest onboard a flight. 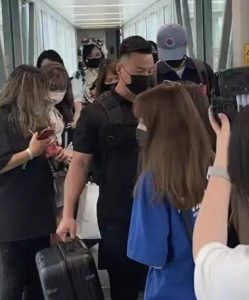 News emerged that Gong Jun was yelled at by fans during a flight, but his studio declined to comment. Afterwards, a passenger on the same flight revealed that the actor was harassed by hostile fans and how the exchange started.

Yesterday, Gong Jun had a very packed schedule where he had to fly from Xiamen to Shanghai for work. After completing the events, he had to return to Xiamen for filming that evening. Thus, he took advantage of his time on the plane to sleep and get some rest. Sitting down next to his bodyguard, Gong Jun threw a blanket over his head for some privacy.

Unexpectedly, around 10 fans bought tickets and followed Gong Jun onto the plane. They barged into the first-class cabin and asked to take photos with him. The flight attendants intervened, but the hostile fans started yelling at Gong Jun and saying demeaning things such as, “I spent money to come see a d**k” and “Now that you’re a big celebrity, things are different.”

The situation became very awkward, and the hostile fans were so loud all the passengers heard them. Gong Jun had his headphones on the entire time and covered his head with his blanket, but it is speculated that he heard their crude words.

After reading the account, many netizens praised Gong Jun for his EQ and condemned the hostile fans for their intrusive behavior.