An active influencer, Grace Chan (陳凱琳) has been inviting her friends to make appearances on her Instagram. Recently, she filmed a video with her younger twin brother Derek. As Grace’s cooking skills leave much to be desired, she put her brother in charge of teaching viewers to assemble some easy to prepare dishes. 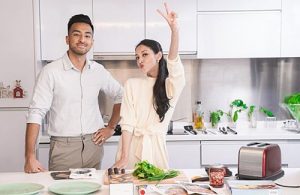 Using unconventional methods, Derek turned a waffle into an open sandwich. He believes that as long as the waffle is crispy enough, it can be treated as bread and is just as filling and convenient. He  suggested placing some cod roe spread or shrimp as a tasty topping, which can be served as an appetizer.

Grace later shared the video on Instagram and wrote, “It took a while for me to convince my brother to get Instagram, but once he did, as Aladdin would sing ‘A Whole New World’ was unleashed! (kidding) But being the fabulous brother that he is, he wanted to cook for me as a way of saying thank you, and whom am I to refuse a free meal?”

Derek later shared his thoughts on teaching Grace how to cook, “My sister’s cooking skills have definitely improved! But since it was all on camera, she had no choice but to eat my cooking.”

Many netizens enjoyed watching the siblings interact on camera together and requested that they film more videos together. They also praised Derek for his dark handsome features, which are a stark contrast from Grace.