Jackson Wang Wants to Star in a TVB Drama 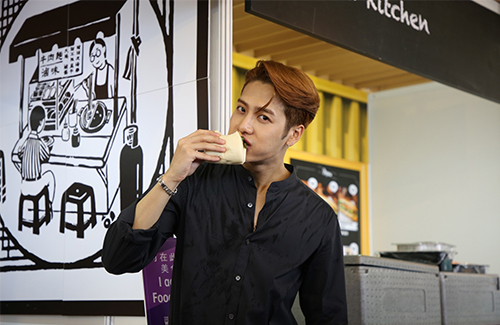 Hong Kong native Jackson Wang (王嘉爾), a member of the K-pop group GOT7, returned to the motherland to attend the Wine & Dine Festival event hosted by Hong Kong Discovery. After going through each tent and trying out all the different foods and wines from around the world, he expressed that he misses Hong Kong’s dai pai dong food the most.

The 24-year-old idol star recently signed a contract with the China-based production company Star Shine Culture, which has also managed stars such as Jolin Tsai (蔡依林), JJ Lin (林俊傑), and Stefanie Sun (孫燕姿). Though he expressed a collaboration would be unlikely, he does hope for the opportunity to work with his seniors someday.

In regard to his future with Star Shine Culture, Jackson said he would like to release a Cantonese song. He also expressed his desire to star in a TVB drama, saying, “I grew up watching TVB dramas, so I really hope for a chance to star in one of their 8:30 pm dramas, even if it’s only a small role!”