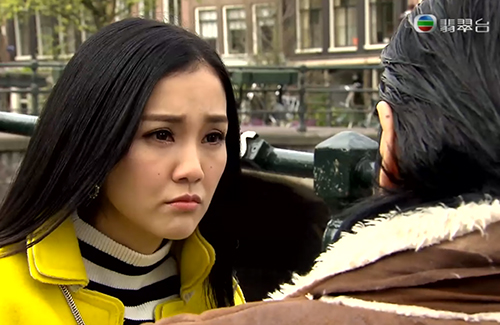 Hailed as one of Cantopop’s most beloved pop stars, fans were thrilled when they heard that Kay Tse (謝安琪) would be making her television drama debut in Blue Veins <殭>. The fantasy drama about vampires, which also stars Kevin Cheng (鄭嘉穎) and Grace Chan (陳凱琳), finally premiered on Monday, April 11.

While netizens said they are impressed with the unique tone of the show, their response to Kay’s acting debut in Blue Veins was less than stellar, criticizing her stiff dialogue delivery and her over-the-top “cute” acting. Some took a further step and suggested that she should take pointers from her actor-singer husband Louis Cheung (張繼聰), who has received acting nominations from both the Hong Kong Film Awards and the TVB Anniversary Awards.

Nonetheless, many more netizens lend their support to Kay, saying that she is a singer first and foremost, and that acting has never been her strongest suits. Kay’s performance on the show is definitely passable, and that it feels good to see a new face on television.

Blue Veins centers on a century-old conflict between vampires and the undead, an immortal superhuman species. Ying Wut-cheuk (Kevin Cheng), an undead warrior, falls in love with Lam Mung-nam (Kay Tse), who he later learns to be an ancient vampire.

The show has been compared to ATV’s classic trilogy television series My Date With a Vampire <我和殭屍有個約會>, a horror fantasy drama that blends Chinese mythology with western vampires. Blue Veins also takes an artistic departure from TVB’s earlier action dramas, as many of the action sequences in the show involved CGI.