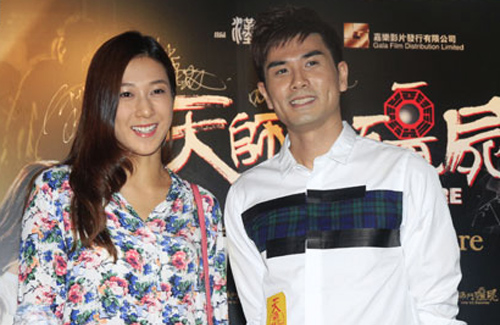 After dating for eight years, 32-year-old Linda Chung (鍾嘉欣) and martial arts actor Philip Ng‘s (伍允龍) relationship has reportedly ended. The couple dated after filming Love is Not All Around <十分愛> in 2007. Their relationship was met with much criticism due to differences in their income level.

An insider revealed, “When they started dating, Linda’s family was very against it. Even the company warned that Philip would drag down her career. The two have been facing immense pressure through the years. At the end of 2013, Linda invited Philip to her concert without consulting her company, causing Herman Ho (何哲圖) to be really upset.”

After persisting for eight years, Philip finally got a break by landing the lead role in Sifu vs. Vampire <天師鬥殭屍>. Believing that they have finally reached the light at the end of the tunnel, Linda slowly began to open up about their relationship, incurring the wrath of her company. The insider further revealed, “Last October, Linda suddenly visited Philip on set of Sifu vs. Vampire. Herman got even more upset and halted the release of Linda’s new record.”

The couple’s happiness was short-lived, as Philip’s career once again reached a plateau.

While dating Philip, Linda sacrificed her career and relationship with TVB. However, Linda finally felt that she should put her career as top priority. “This year, both their careers are bleak. They’re moody and constantly argue. She also feels that she is getting old and is wasting time having to wait for Philip’s career to improve. She feels that their future together is unpromising, so she decided to break up.”

The pair reportedly agreed to keep their break up under wraps. Suspicions arose when Linda recently responded to questions about whether she would cook for her boyfriend, “I don’t have a boyfriend. I only have friends.”

When reporters called to inquire about his breakup with Linda, Philip responded, “I won’t respond to these reports. You called so late; it’s inconvenient for me to say.”