The currently airing Brutally Young <十八年後的終極告白> has been praised for its exciting storyline and well-thought-out character development. Starring as a police officer and the love interest of a morally gray character, Mandy Wong (黃智雯) has been praised for her ability to exhibit both her character’s strong-mindedness as well as her softer, more feminine side.

Reflecting on her character, Mandy expressed, “My character is strong on the outside, but also possesses a side that is weak and dependent on others. It reflects a very realistic personality. Actually, women do not have to just only have to be stubborn or strong-willed.” 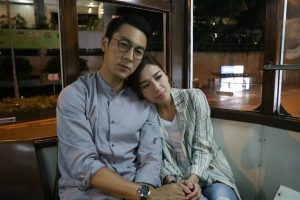 In the drama, her character not only suffers from loss of loved ones, but also suffers multiple betrayals from people closest to her. Mandy added, “When I was younger, I did not think there would be anything that would make me unhappy. I am fortunate to not have experienced any extreme suffering or losses. However, after filming this drama, I feel that there is a thin line between life and death. A lot of things that we believe are certainties can be lost forever in a blink of an eye. I realized that when we grow up and become adults, we will have to face and deal with losses and many other unfortunate things.”

Although Mandy puts in 100 percent effort to portray all of her characters to the best of her ability, she still finds tragic scenes to be the toughest to perform. “I am not someone who will give a lot of priority or hold on to sadness. However, when I was filming, I constantly had to think about unhappy things and make myself unhappy in order to get into character. The negative thoughts and emotions festered. Coupled with restlessness due to work, I eventually became very depressed and didn’t know how to smile.”

In addition to the highly praised Brutally Young, Mandy is also the female lead in the much-anticipated sequel, The Exorcist’s 2nd Meter <降魔的2.0>. With two high-profile dramas airing simultaneously, perhaps this year will be Mandy’s year to pocket Best Actress. On her chances of winning, Many said, “There are some things that I cannot control. What I can control is the quality of my performance. This is an artiste’s responsibility. As long as I take chances and make use of every opportunity, then I will not think it is a waste. The thing that is most regretful would be if I did not make the best out of my chances and portray my characters to the best of my ability. I don’t want the audience to feel that I am repeatedly portraying the same types of characters. What I need to do is portray a variety of characters on screen for my audience.”