“The Empress of China” Premieres in South Korea 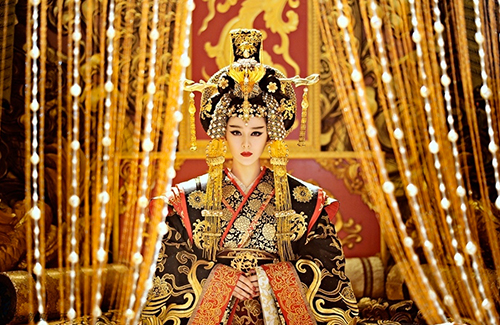 Could this be the dawn of an impending Chinese wave? After the successful Korean broadcast of the historical epic Nirvana in Fire <琅琊榜> last year, the next Chinese television drama to hit Korean airwaves is The Empress of China <武媚娘傳奇>, starring Fan Bingbing (范冰冰). The biographical epic about China’s first and only empress regnant premiered on South Korea’s Chunghwa TV on March 14, 2016.

The Empress of China first aired in Mainland China in December 2014 to record-breaking success. The first episode, which aired on Hunan TV on December 21, was the highest-rated premiere episode ever recorded in history. It finished its run as the highest-rated Chinese television drama in ten years, breaking a new record. Due to its astronomical production budget, expensive costumes, and large cast, The Empress of China already attracted an international following in the early days of its inception. The show received wide international media coverage when Chinese censors halted the broadcast for a few days to censor the actress’s “racy” costumes. Though the move was criticized by many Chinese viewers, ratings for the 2014 series were not affected. Hong Kong’s TVB aired a “CGI cleavage” version the following year, while Taiwan’s CTV aired the original, untouched version.

The success of The Empress of China reached South Korea even before the show’s local broadcast this month. Early last year, the Running Man cast photoshopped their own faces onto various characters in the series and shared it on social media. Zhang Yuan (張玉安), a Chinese television personality in Korea, talked about his disappointment at the drama being censored on his show, Non-Summit. Actor Lee Seung-gi has said he was willing to lower his pay just so he could work with Fan Bingbing.

TAGS: The Empress of China

24 comments to “The Empress of China” Premieres in South Korea