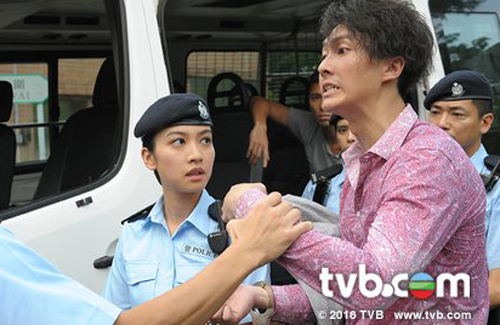 The finale for Over Run Over <EU超時任務> averaged 29 points and peaked at 30 points, becoming the TVB drama with the highest viewership rating during its finale broadcast. Thrilled with the results, Tracy Chu (朱千雪) and Vincent Wong (王浩信) plan to celebrate with the rest of the cast and crew.

Vincent hopes to film a sequel so he can reprise his comical role, Ditch. Vincent expressed, “We watched the finale in Vietnam and were so touched by the netizens’ positive comments. Looking back – the series was incredibly stressful to film and we sacrificed a lot. We’re so grateful that the audience liked it. I really want to film a sequel – everyone worked well together and we had a great time.”

Vincent may have endured endless action scenes, but Tracy’s tough cop role was equally stressful to film. Tracy recalls only getting half an hour of sleep each night during filming. She revealed, “One time when we got off work, I actually fell asleep in my car at the parking lot. When I woke up, it was already time for work. However, no pain, no gain – it was worth it in the end.”

TVB producer Lam Chi Wah (林志華) expressed that he will hold a big celebratory dinner with everyone once the crew is back in Hong Kong. Pleased with the viewership ratings and positive feedback for Over Run Over, Producer Lam will consult with TVB as to whether a sequel will be filmed. He also complimented Benjamin Yuen’s (袁偉豪) outstanding performance as a first time villain.

19 comments to Vincent Wong, Tracy Chu Celebrate Good Ratings for “Over Run Over”