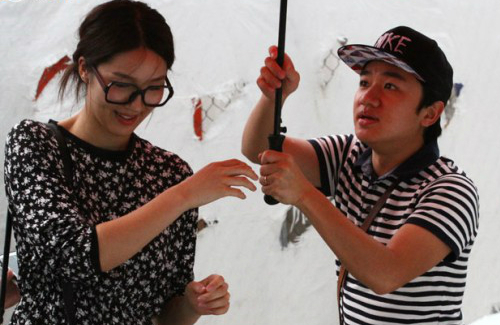 Wong Cho Lam (王祖藍) and his wife Leanne Li (李亞男) were earlier spotted visiting their new luxurious mansion in the Mayfair By the Sea complex located in Tai Po, Hong Kong. Since there was a storm that day, Cho Lam shielded Leanne with a large red umbrella and remained protective of her throughout the journey.

Cho Lam and Leanne’s new home is approximately 3,000-square-feet in size, and accompanies a private swimming pool. According to tabloids, Cho Lam pocketed large sums of money by participating in reality television shows in Mainland China. He is also alleged to be taking part in a film production project with Wong Jing (王晶), Andrew Lau (劉偉強), and Anthony Chan (陳友).

In a telephone interview, Cho Lam shared, “We’re moving to a larger home this time, so that we won’t have to move again if a baby comes along! But it’s been quite sad for Leanne lately, since she was alone for long periods of time while I’m away for work in Mainland China. Thus, we’d like to spend two or three more years in a world of our own first!”

Cho Lam added that he hopes to become an artiste manager in Mainland China one day. He revealed, “I’m going to be a producer for my next project, and I want to help Hong Kong artistes expand their opportunities within Mainland China. But if I were to start my own production company, I hope to manage artistes as well!”

When asked if he would help Leanne plan out a career, Cho Lam replied, “She’s also really busy filming something right now. Besides being her husband, I’m also her boss! She’s currently very happy filming together with her parents, since it’s a great opportunity to spend some extra family time.”