Yang Mi Eats Only One Strand of Noodle 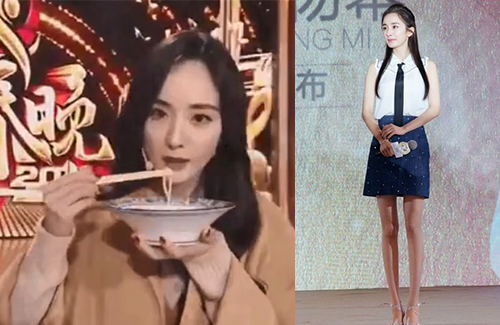 Chinese superstar Yang Mi (杨幂) has always been known for her slim figure and even slimmer legs, but for the 33-year-old, the secret of staying slim is simple: control your diet.

Fans of the Eternal Love <三生三世十里桃花> actress witnessed this firsthand in an episode of a recent CCTV variety show, where each celebrity guest was given a bowl of Chilli Blood Curd Rice Noodle, which also happens to be Yang Mi’s favorite dish.

In the clip, Yang Mi nibbled on a single strand of noodle, nodded her head in praise, and set the bowl down. She did not touch the bowl again.

Netizens and fans alike were shocked at how disciplined Yang Mi was when it comes to controlling her own diet.

According to a source, that segment was shot in the middle of the night. To maintain her weight and figure, Yang Mi does not snack at night. Should the segment be shot earlier in the day, Yang Mi would’ve taken a few more bites. Nonetheless, the source also added that Yang Mi was never a big eater in the first place, and is easily satisfied by just a few bites of food.

9 comments to Yang Mi Eats Only One Strand of Noodle