On April 19, the drama dropped its first teaser poster of Yang Yang, who will play Yan Poyue, a young man from a military family who joins the military to win his father’s approval.

The drama is directed by Xu Jizhou (徐纪周), best known for his work on war dramas Sha Hu Kou <杀虎口> and Forever Designation <永不磨灭的番号>. Xu said his focus for Te Zhan Rong Yao is to bring more awareness about the lives of modern military man to the masses, and how the military’s younger generation view pride, honor, and loyalty. 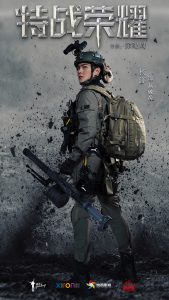