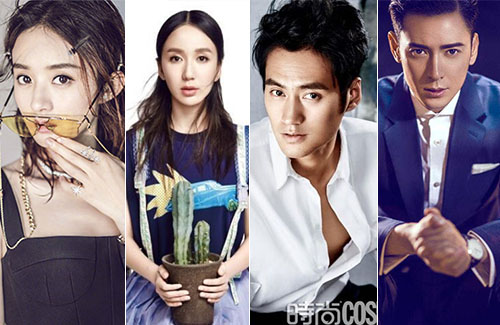 The hit television series which starred Nie Yuan (聂远), Crystal Huang Yi (黄奕), Shi Xiaohong (师小红) and Li Lin (李琳) tells the story of two Yangzhou women who each went on the wrong wedding carriage when the bride-to-bes stopped by the same small village town to avoid the downpour of rain. The girls ended up marrying into the wrong families. The period comedy is regarded as a classic in the Chinese TV industry.

According to various reports, Zanilia Zhao and Loura Lou are being courted to play the two female leads in the remake. Han Dong (韩栋) and Yuan Hong (袁弘) are rumored to be playing the two male leads.

Zanilia is one of China’s highest-paid actresses—many of her starring dramas have become ratings hits in the mainland, with the smash hit Princess Agents <楚乔传> being her latest success. Loura Lou, on the other hand, came to prominence after starring in the hit television series iPartment <爱情公寓>.

Should this casting come true, the Wrong Carriage remake may end up being the main act to push Han Dong, who despite having had a prolific acting career, failed to find a hit under his hands.

What do you guys think of this casting?