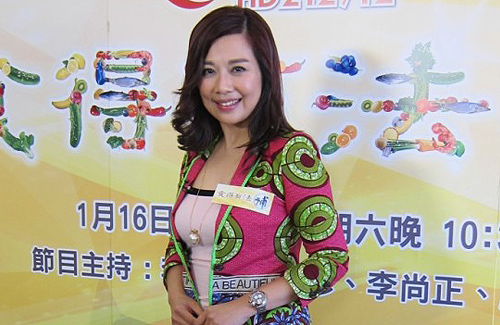 Forty-four-year-old Adia Chan (陳松伶) semi-retired from the entertainment industry after marrying 36-year-old Mainland actor Zhang Duo (張鐸) in 2010. Currently, she permanently resides in Beijing with her husband. However, Adia flew from Beijing to Hong Kong in order to make a rare public appearance in a variety show about food. Adia revealed that she is making this comeback because of Shek Sau (石修), who is hosting the program.

“The biggest reason [for making this appearance] is because I get to work with my old friend Shek Sau and Louise Lee (李司棋). The last time I collaborated with Shek Sau was ten years ago. At the time, we were filming as a couple. It’s been many years and he’s still so fit. I’m very excited for the next time we collaborate, perhaps in a concert!”

Despite the couple’s eight-year age difference, Adia shared that Zhang Duo is extremely attentive towards her. “At this age, I need to pay attention to my health. Before, I used to drink three cans of soda each day. After getting married, my husband forced me to give up my unhealthy habits. Right now, he wakes up earlier than me every day and would place a warm glass of water by my bedside. He wants me to drink more water. He’s quite attentive! His lifestyle is like a ‘grandpa.’ He is always telling me to be mindful of my health.”

Married for five years, the couple does not have any children. Adia joked that she needed to be even more mindful of her health. “If we do not take care of our health, there will be no one to take care of us when we’re older!”

Adia has been making more frequent appearances in Hong Kong recently to promote her new lingerie business. Working hard on her new business launch, Adia often stayed up until 3 to 4 a.m. and even neglected her husband. She said apologetically, “I feel like I owe him because he’s been supporting me mentally and financially. He’s also very patient – how can a married couple go three months without seeing each other? That’s why when I have time I would fly over to visit him. I also have work in Beijing and Shanghai – I’m just juggling everything right now.”

With her energy focused on her new business, Adia has not thought about having a baby in the near future. Her husband is very understanding and supportive of Adia’s business venture.

This article is written by Huynh and Su for JayneStars.com.