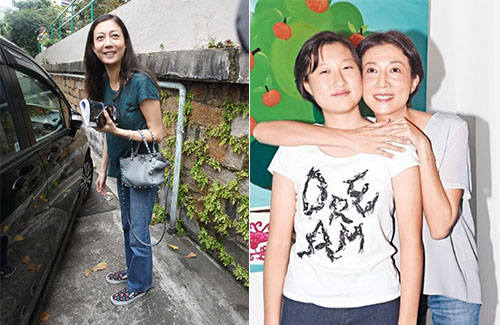 On the early morning of March 24, Elaine Ng (吳綺莉) was arrested on suspicion of threatening her 17-year-old daughter, Etta Ng (吳卓林). It was Etta herself who reported her mother to the police.

According to the sources, Elaine wanted her daughter to take some medication, but Etta insistently refused to take them. The two started to quarrel, which resulted in Elaine allegedly saying, “Since you won’t take them, just die!” Etta then reported her mother to the police, accusing her of intimidation, and Elaine was arrested.

Elaine and Etta’s case was followed by the Wan Chai Police Station. After an entire morning of questioning, Elaine was finally released on Friday afternoon.

The actress was confronted by reporters when she reached her residential complex that night. She dismissed questions and told the reporters to leave. Elaine looked sickly and her eyes were red. When asked if she had contacted her daughter, Elaine swiftly said, “No!”

Elaine gave much more elaborate responses to the reporters the next morning. She said, “It was a typical family spat. Parents being a little too harsh on their kids. I’m still learning.” (Is Etta still mad?) “She’s calmed down.” (Will Etta be living with you again?) “Of course she will. It’s her home after all.” (Where is she now?) “She’s at a safe place.”

Asking if Etta has forgiven her, Etta said, “We are mother and daughter. Family. I apologize for this. Because I am in this industry, it became a big deal. I will handle this with care.”

Would this case be considered criminal intimidation? Elaine said, “I don’t know. I need to consult my lawyer. Let’s not make this into a bigger issue.”