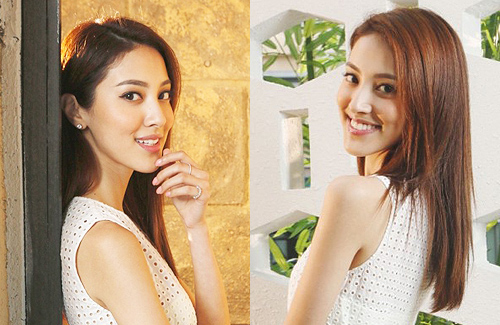 After being crowned Miss Hong Kong in 2013, Grace Chan (陳凱琳) was blessed with many filming opportunities. Her decision to join the entertainment industry also entwined her fate with boyfriend, Kevin Cheng (鄭嘉穎), whom she often gushed about for being mature and attentive. With luck in both career and love, Grace is currently one of the most highly promoted fadans at TVB. However, good friend and Miss Hong Kong 2013 first runner-up, Sisley Choi (蔡思貝), may be exceeding Grace in terms of career growth.

Not only is Sisley filming dramas back-to-back, but the 25-year-old actress also received the opportunity to take part in a movie alongside Best Actor, Nick Cheung (張家輝). Despite being compared to Sisley often, Grace expressed that she did not possess any envious feelings about Sisley’s successes. “A movie is only three hours long while a television series is 30 episodes. A movie only requires those few hours to showcase the actor’s performance. On the other hand, TVB is a great company where I can learn things. I want to take things one step at a time. Besides, in addition to great acting skills to film a movie, timing is also very important!”

Grace shared that she was also invited to star in a horror movie even before participating in the beauty pageant. Due to her religious beliefs, however, Grace rejected the offer. “At the time, my manager asked me if I cared about filming this genre of movies. In the end, I rejected it!” On why she accepted the role in Blue Veins <殭> despite the supernatural subject, Grace explained, “The paranormal subject in films are much more realistic. Furthermore, it’s not as scary because of the limitations imposed on television dramas!”

63 comments to Grace Chan Denies Being Envious of Sisley Choi