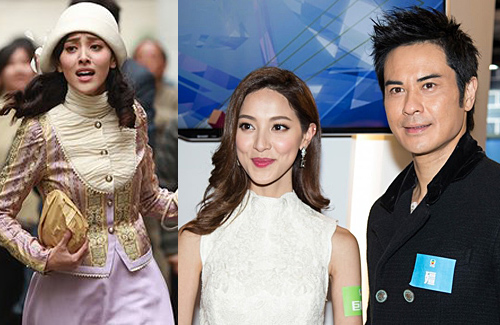 Facing viewers’ criticism over her acting, Grace Chan (陳凱琳) admitted that she had felt deeply unhappy and lost confidence in herself. Although boyfriend Kevin Cheng (鄭嘉穎) has encouraged her by giving her acting tips before, Grace still does not want him to watch her performance in the currently airing The Forgotten Valley <平安谷之詭谷傳說>.

Grace explained, “I know Kevin hasn’t seen the drama. I told him not to watch it because I’m anxious about his criticism. I don’t think I’m able to perform to his expectation yet.”

Asked if she is concerned Kevin will be jealous if he watched her kissing scenes with Raymond Wong (黃浩然) in the drama, Grace said, “Although this is a pre-modern drama, but my character is more open due to my westernized upbringing. Our characters are newlyweds and will show our affections towards each other.”

When teased if she will often kiss Kevin at home, Grace said, “During appropriate times. Of course if we are arguing then we won’t kiss immediately afterward.”

Since Kevin is 12 years older than Grace and has more experience, he would give her acting tips. Grace revealed, “He often suggests that I can pay more attention to the small details, such as my voice and gestures.” She added, “One time, I asked Kevin to read the script for me because I was very unhappy over viewers’ criticism.”

Aware of viewers’ harsh criticism towards her acting, Grace had even questioned if she should persist in the profession. “Dramas should entertain viewers. If I make viewers upset or unhappy with my acting, then am I doing the opposite of what I am supposed to do?”

But Grace’s perseverance is paying off, as viewers have noticed an improvement in her acting in The Forgotten Valley. “Before the drama was aired, I tried to prepare myself as to what others will say. Although I can’t say that all my confidence has returned, it’s better than before. I feel less hopeless. Hope that viewers can accept me in different roles. Many people say that my role [in The Forgotten Valley] reflects my real-life personality. But as an artiste, I want to portray characters that are very different than my real self.”