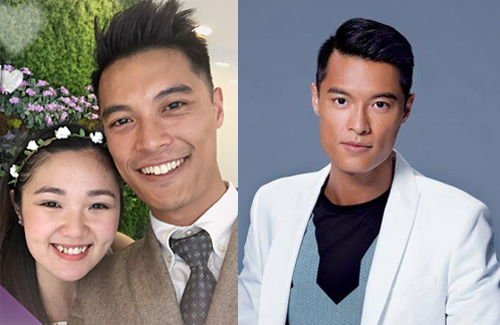 Getting involved with co-star Ashley Chu (朱智賢) while his wife is currently eight months pregnant, Jackson Lai (黎振燁) received severe backlash for his betrayal. The 34-year-old former Mr. Hong Kong had even allegedly asked his wife for a divorce in March. While Jackson left their home in the heat of an argument earlier, the actor has now made amends with his wife and regrets his mistake.

During the filming of TVB drama Zombie <食腦喪B>, Jackson grew close to Ashley. Two weeks after filming wrapped up, Jackson drove Ashley to a secluded area for a secret date. While the pair was eating cake inside Jackson’s car, the paparazzi walked in on them and exposed their affair.

At today’s press conference, Ashley made it clear that her involvement with Jackson is over. Ashley’s public apology may ease public pressure on the actress, especially since she has already been forgiven by her boyfriend, singer Brian Tse (謝東閔). However, Jackson may have a bumpier road ahead, and it will remain to be seen whether the scandal will cost him his acting career, although he signed a ten-year contract with TVB.

Jackson and his wife met in high school, and they have been married for five years and together for a total of fifteen years. She had supported his dream to become an actor, even though there were many obstacles and financial difficulties along the way. Prior to getting involved with Ashley, Jackson had described his wife in an earlier interview, “I’m a very emotional person. She really knows how to handle my emotions. I can’t be without her. I’m truly thankful towards my wife for tolerating me all these years.”

Making amends with his wife, Jackson has already moved back to their apartment in Upper Wong Tai Sin Estate. While TVB management requested her to accompany Jackson at a press conference today, she backed out of the arrangement last minute due to stomach pains. To ensure the baby’s safety, the couple decided to rest at home.

According to a source close to the family, Jackson has reflected on his mistake and promises not to betray his wife’s trust again. The couple also made plans to move to Jackson’s parents’ home after the baby is born, so his wife will receive more help in her postpartum confinement.

25 comments to Jackson Lai is Forgiven by Wife