Joey Yung (容祖兒) and Wilfred Lau (劉浩龍) are officially back together after a rumored breakup in March. With Joey’s career more successful than Wilfred, the couple faced outside pressure and hit a rocky bump earlier this year. But apparently, all is well again as the couple was spotted having dinner together last night.

When asked whether she had broken up with Wilfred in March, Joey was cautious in her response and only said, “I don’t want to say too much.” Perhaps the couple was still working through issues at the time and Joey found it more appropriate to be open-ended in her responses, as it is not easy to walk away from their five-year relationship.

There were signs that Joey and Wilfred’s relationship improved in April, when she showed up to root for Wilfred’s April concert. Some even wondered if the pair had pulled a publicity stunt to gain attention for Wilfred’s concert. For Joey’s birthday celebration last week, Wilfred was among the many guests, including Charlene Choi (蔡卓妍), Yumiko Cheng (鄭希怡), and Nicholas Tse (謝霆鋒) who attended.

Leaving at 11 p.m., Joey was seen stepping out of the restaurant with a big smile on her face. Although they were initially walking closely together, the couple immediately separated when they saw reporters. Quickly boarding Joey’s car, her driver dropped off Joey at her home first before driving Wilfred home. 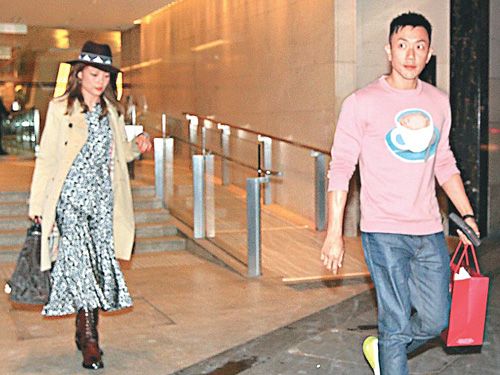