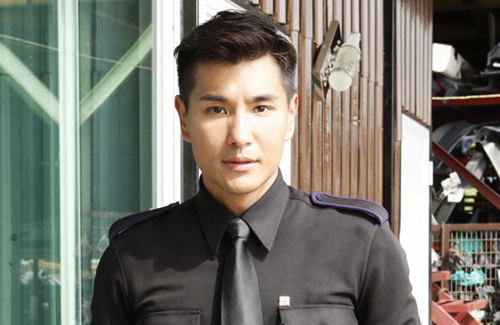 Following the news of TVB high-level executive Pang Chai Choi‘s (彭濟材) retirement, rumors regarding staff implications have been flying. For a start, TVB executive, Catherine Tsang (曾勵珍), who has always been in Pang’s camp, has allegedly been “demoted” to the position of “Consultant” in the drama division. As a result of this alleged demotion, Catherine’s favored artiste Ruco Chan (陳展鵬) has been left with few opportunities.

In response, Ruco dismissed the rumors as lacking credibility and completely unworthy of any attention. Ruco emphasized that he is currently busy with filming both Brother’s Keeper II <巨輪II> and Heroes of the Walled City <城寨英雄>. Due to filming both dramas, Ruco had also missed promotional activities for currently broadcast drama Captain of Destiny <張保仔> .

Reports further alleged that Catherine Tsang’s proposed drama Triad Boss Under the Fire Line <火線下的江湖大佬> currently faces the prospect of being cancelled due to the office politics at TVB. The producer of Triad Boss Under the Fire Line, Leung Choi Yuen (梁材遠) responded and that the production team had just wrapped up filming a promotional video for the drama, and did not receive any news regarding its possible cancellation. Choi Yuen added that the drama is slated to commence filming in November.