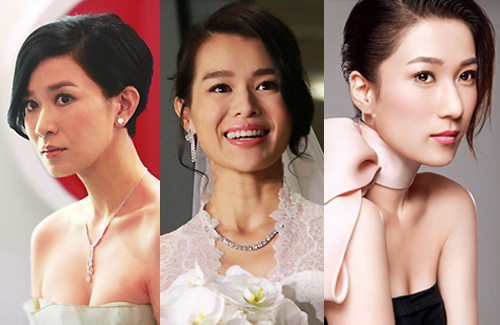 Many of TVB’s top actresses have left the station for higher pay in Mainland China or lessening their workload after marriage. Following the departures of Charmaine Sheh (佘詩曼) and Myolie Wu (胡杏兒) from TVB, Tavia Yeung (楊怡) is also expected to leave once her contract expires in April. Aimee Chan (陳茵媺) has been on extended leave-of-absence since giving birth to two sons and nursing her current pregnancy. With Linda Chung‘s (鍾嘉欣) wedding announcement and speculation that she is currently five months pregnant, it is expected that she will be absent from TVB screens for some time as well.

Being crowned TV Queen twice in her career, Charmaine Sheh (佘詩曼) has always been very popular with viewers. She has starred in many well-known dramas, such as Line Walker <使徒行者> and Beyond the Realm of Conscience <宮心計>. Charmaine ventured into the Mainland Chinese market, which offers significantly higher pay. Subsequently, Charmaine attempted to sign short-term contracts with TVB China, where she would be involved in dramas on an ad-hoc basis. This eventually did not work out and Charmaine has decided not to renew her contract.

At the end of her 16th year with TVB, even TV Queen Myolie Wu (胡杏兒) left and signed with Stephen Shiu Jr‘s (蕭定一) company, GME. Myolie was allegedly offered $35 million HKD as a sign-on bonus. Moreover, since her marriage with Philip Lee (李承德) last December and her earlier establishment of a bridal studio, Myolie made plans to gradually fade out of the TVB  spotlight.

Miss Hong Kong 2006, Aimee Chan (陳茵媺) finally made it to the A-list after spending years toiling away at TVB. After marrying Moses Chan (陳豪) in 2013, Aimee took a leave-of-absence to raise their two sons. Currently pregnant with her third baby, it would be difficult for Aimee to make a comeback anytime soon.

Another TV Queen, Tavia Yeung (楊怡) would see her contract with TVB expire in April. There have been rumors that Tavia plans to settle down and marry long-term boyfriend, Him Law (羅仲謙), and is thus not inclined to renew her contract with TVB. On whether she would be getting married soon, Tavia said coyly, “I would naturally share the good news with everyone, if I had any!” As for whether she plans to slow down the pace of her work, Tavia gave a straightforward answer, “I don’t wish to work too hard, as I’m getting old!”

Linda Chung is also expected to significantly slow down her television dramas output as well. Linda quietly registered her marriage with TVB Chairman Norman Leung‘s (梁乃鵬) nephew, a Canadian-Chinese chiropractor known as Jeremy, in fall 2015. The couple’s wedding banquet will be held on February 27 in Vancouver. As Linda is also reportedly five months pregnant, she is likely to not be involved in new filming projects for some time.

Linda has requested leave of absence until March 31 from TVB to take enjoy her new marriage. TVB executive Virginia Lok (樂易玲) said, “Let’s wait until she is done with her wedding banquet.” Asked the length of Linda’s remaining contract with TVB, Ms. Lok said, “There’s still some time left. Getting married and starting a family will not affect her contract.” Asked whether Linda will film dramas after having a baby, Ms. Lok said, “No problem!”

However, Linda’s music teacher, Pancy Lau (劉鳳屏), felt that Linda wants to eventually fade from the television spotlight. Pancy told reporters, “She wants a change. When I was young, I felt the same way. Sometimes [Linda] feels stressed from work, so she wants to relax a bit!”

46 comments to Top TVB Actresses Gone; Is Linda Chung Next?