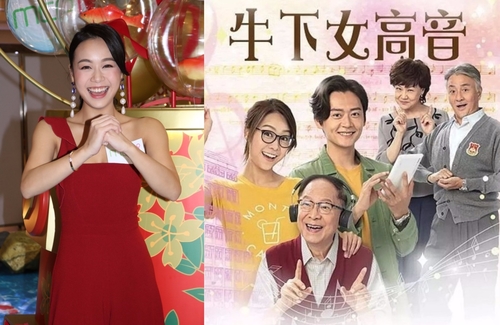 As luck would have it, TVB drama Finding Her Voice <牛下女高音> starring Jacqueline Wong (黃心穎) is set to air on the evening of October 7. It was originally shelved following Jacqueline’s cheating scandal with Andy Hui (許志安), but it was then rumored that the drama would be reshot with Kaman Kong (江嘉敏) taking over Jacqueline’s role. Although the plan fell through, in the end, Finding Her Voice was chosen as one of the anniversary dramas, defeating contenders like TVB action-comedy Agent C9 <C9特工> and Mainland comedy-drama Legend of the Phoenix <鳯奕>. Its broadcast suggests that TVB has let Jacqueline off the hook and she might return to the small screen.

Finding Her Voice producer Wong Wai-sing (黃偉聲) said he is unsure if Jacqueline will return to Hong Kong to promote the drama.“The company did not talk about it, but they did not say she can’t join the promotions,” Wai-sing shared. “I previously reached out to her on WhatsApp to let her know the drama is airing, but she didn’t reply. She’s not even in Hong Kong.”

Jacqueline’s Scenes Were Not Deleted

However, the producer believes Jacqueline’s absence will not have a big impact on the series, as she doesn’t have the most scenes in the drama. “Actually, the most important part of the drama is that Chung King Fai (鍾景輝) found his seven apprentices, whom he hasn’t seen for over 40 years. Everyone relives the old days of when they happily sang.”

When asked if Jacqueline’s scenes were erased, Wai-sing revealed they did not reduce her appearance. “There are a total of 30 episodes,” he stated.

In fact, there hasn’t even been much time to prepare for the show’s broadcast since Wai-sing only found out about the update last Friday. “We just completed the promotional clip. Since there are only a few weeks left, we’re in a rush,” he explained.

Male lead Hugo is ecstatic to hear the news. “The most important thing is that it can be aired again,” he expressed. “It’s the perfect time to broadcast it considering the recent troubling events. The theme is very inspirational and positive.”

Hugo continued, “It’s mainly about a group of middle-aged men who are encouraged by their teacher, King Fai, not to give up. Although we’ve reached a certain age, we must continue to pursue our dreams, and not give up on life so easily.”