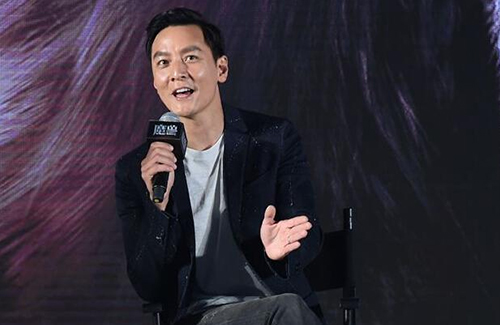 41-year-old Chinese American actor Daniel Wu (吳彥祖) is more than just a pretty face. The Hong Kong-based actor, who made his debut performance in the 1998 romantic drama film Bishonen <美少年之戀>, or Beautiful Boys, doesn’t want his good looks to overshadow his passion for acting.

“I joined the industry because I love acting,” he said. “It’s not because I want to be a celebrity. I still consider myself as a traditional actor.”

Daniel is currently on a tour to promote his new Hollywood film Warcraft, an epic fantasy film based on the video game series of the same name. In the movie, Daniel plays Gul’dan, a villainous orc warlock. Daniel brought the role to life through CGI, and the character is completely different from Daniel’s own image.

When the topic about how the Korean “flower boy” image has become popular in recent years, Daniel admitted, “A lot of people like to make themselves look like Korean celebrities nowadays. Style their hair in strange ways, put a lot of make up on. Men don’t look like men anymore. I don’t understand that.”

He also added, “A lot Korean celebrities look the way they do because they are singers, not actors. If you try to look like them all the time, it’ll affect your role as an actor. If you dress up strangely every day, how would you be convincing in a role where you’re supposed to look plain? The audience would get a certain impression of you. That can affect your acting career.”