Edison Chen Dating a Married Woman? “I Have Many Girlfriends!” 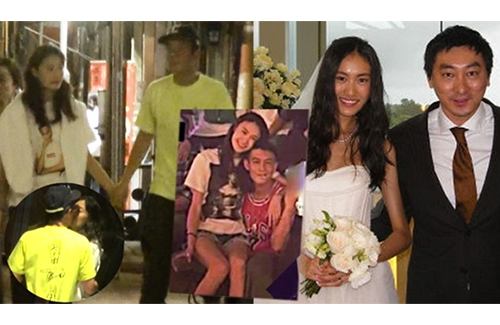 The tabloids are back with their latest scoop on the controversial star Edison Chen (陳冠希). According to their sources, Edison is currently seeing model Shupei Qin (秦舒培), a 26-year-old married woman from Mainland China. Their relationship came to light when the paparazzi spotted them locking lips in public.

Shupei Qin made her debut in the model industry in 2006 at 16 years old. In 2010, she entered the the world’s top 50 models list. In 2012, she worked as a runway model for Victoria’s Secret. She married Leigh Gow (趙磊), general manager of the Huayi Brothers Fashion Group, that same year in Australia. Shupei and Gow are estranged and are going through divorce.

On Tuesday, Gow posted an angry rant to his social media, calling Edison and Shupei as “a couple with no sense of morality at all.” In his rant, he implied that Shupei had cheated on him with Edison before the couple became estranged.

Gow said, “Why did I choose to be silent? Why still respect the people who do not deserve to be respected? Is it really because I want to protect what we once had together? Is it because I do not want to hurt my friends and parents? Also, when did cheating become such a fashionable statement? P.S. the divorce isn’t finalized yet. Why do you want my blessing?”

Edison, who was spotted leaving a hotel with Shupei on Tuesday afternoon by Apple Daily reporters, was asked to comment on the tabloid report. Edison shouted, “I have many girlfriends! Just look at my Instagram!” He then used his own phone to record the reporters, and even tried to kiss a reporter on the cheek. He cursed and threw rude hand gestures.

After the encounter, Edison shared a picture of himself wearing a t-shirt that read, “[expletive] We Do What We Want” with the caption, “People keep asking me to stand up and say something but I’m out of breath… read my tee shirt and get my reply… [by the way, I’m] dating girls in 15 different cities so stop hating on me.”

He then posted a photo he took of an Apple Daily reporter and wrote, “To all my Hong Kong soldiers who love to be free, if [you] see this guy [expletive] with him please!”

Shupei, on the other hand, chose to respond to the matter through Weibo. She stated, “First off, thank you for everyone’s concerns. As for what happened in the last two days, I feel like I need to come out to make a clarification. Leigh Gow and I have already signed the separation papers drafted by Leigh Gow’s attorney. I do not intend to create speculation and I also do not want to trouble others with this matter. I do not understand why he has to hurt me in such an irresponsible way. Although we can no longer be husband and wife, I still wish the best for Mr. Gow.”

20 comments to Edison Chen Dating a Married Woman? “I Have Many Girlfriends!”