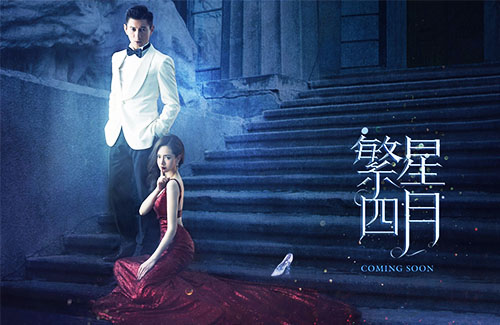 Chinese drama Fanxing Siyue <繁星四月>, also known as April Star, has been airing on Jiangsu TV and Anhui TV to refreshing success. The attractive romantic drama, directed by Vicky Wong (黃偉傑), brings together Stephy Qi Wei (戚薇) and Nicky Wu (吳奇隆) for the first time in their careers, opening up a heart-wrenching romance that’s putting viewers on the edge of their seats.

Main character Ye Fanxing (Stephy Qi), or “Star”, is a successful and popular radio DJ who is in an underground relationship with Xiao Han (Nicky Wu), the CEO of Sun Group. Min Siyue (Zuo Hang 左航), or “April”, has always been in love with Xiao Han, but after befriending Fanxing, she quickly discovers their underground relationship as well as her own true identity as Fanxing’s long-lost sister. Meanwhile, Xiao Han’s nephew Fu Xia (Ming Jen 任言愷) falls in love with Fanxing, creating a complicated love triangle.

April Star is a juicy soap opera that explores the complexity of human nature. It teaches that all obstacles can be overcome with hope and determination. Here are five reasons why you should tune into the show!

Fanxing Siyue, roughly translated to “Stars [of] April”, combines the names of the show’s two female leads, Fanxing (Stephy Qi) and Siyue (Zuo Hang). “Fanxing” means plentiful stars, and “Siyue” means April, the month of spring and life. In season and in style, the drama’s April premiere date was of no coincidence. April Star features the star power of Stephy Qi and Nicky Wu in the their first collaboration. The drama also stars Best Actress winner Sheren Tang (鄧萃雯), playing the mother of Stephy. Along with the casting of power rookies like Zuo Hang and Ming Jen, the drama aims to be a product of both beauty and talent.

The series is the epitome of enticing melodrama—Fanxing and Siyue grew up together as sisters, but are not blood related. When they got separated, Fanxing ended up with Siyue’s biological mother, while Siyue ended up with Fanxing’s own birth mother. To complicate matters, Fanxing and Siyue later meet in adulthood and become friends, without realizing that they are each other’s long-lost sister. Siyue is also in love with Fanxing’s secret boyfriend, who has a nephew that has a crush on his uncle’s girlfriend. It’s an exciting mess of relationships. Each character has their own heartbreaking story to tell: though Fanxing and her boyfriend, Xiao Han, are both extremely successful in their careers, they have to keep their relationship underground. When Fu Xia realizes that the woman he loves the most is dating his own uncle, he has no choice but to sacrifice his own happiness, and silently protect Fanxing from behind. Fanxing realizes that not only is her close friend her long-lost sister all along, Siyue’s mother is actually her own birth mother—but for the sake of everyone’s happiness, Fanxing has no choice but to keep all of these secrets to herself.

If melodrama is not the reason to tune in, then perhaps the drama’s trendy fashion can draw some loyal viewers. Viewers have been rave about the drama’s high quality production and its attention to detail—many are saying the drama itself is a runway show for Stephy Qi, who appears in some of the trendiest fashion of today.