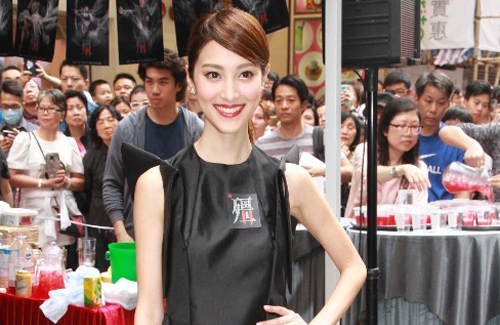 Since falling in love with Kevin Cheng (鄭嘉穎) after filming Blue Veins <殭>, Grace Chan (陳凱琳) has often gushed about him when speaking to the press.  Due to their high profile romance, tabloid reports alleged that Grace prioritized her love life and has developed a poor attitude towards her work, often being late to events.

At a promotional event for Blue Veins, Grace addressed the rumors, “I value punctuality. I’m almost never late for events because I see this as a form of respect. The report claimed that I was late, so this is not true.”

Grace admitted that the recent report, which attacked her professionalism, bothered her. Fortunately her parents and Kevin consoled her. Asked if she found it stressful to be in the limelight because she is Kevin’s girlfriend, Grace said, “It’s not stressful, but I don’t want others to attack us because of our relationship. We are just a normal couple dating, I hope others will not target us because of our relationship.”

Since Blue Veins will be broadcasting on April 11, TVB has planned a series of promotional events to publicize the vampire-themed drama. Grace, Moon Lau (劉佩玥), and Anjaylia Chan (陳嘉寶) attended today’s event, while Kevin and Kay Tse will appear at a later event.

39 comments to Grace Chan Denies Having a Poor Work Attitude