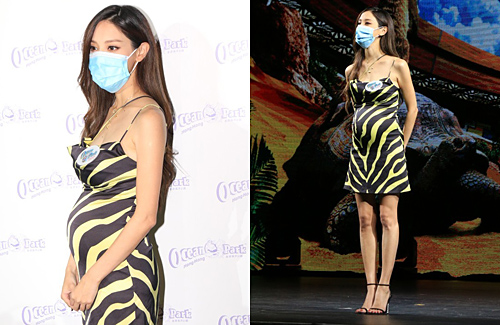 In her second pregnancy, Grace Chan (陳凱琳) revealed her pronounced belly bump as she showed up in a three-inch heels and a curve-hugging dress for a promotional event at Hong Kong’s Ocean Park today. Declining to share how far along she is, Grace admitted that she is at least halfway through the pregnancy and assured that the baby is very stable.

Unlike her first pregnancy in which Grace experienced some morning sickness, this time has been surprisingly a calm experience and she has been able to eat and sleep normally. Although Grace had a Cesarean section for her first baby, she will let her doctor decide on the type of delivery this time.

At her upcoming baby shower next week, Grace plans to finally reveal the baby’s gender through the cake color. While one-year-old Rafa is still too young to understand that he is going to be a big brother, many people have already bought presents for him so that he will not be jealous. Grace also prepared some books for him and hopes to cultivate his sense of curiosity.

Turning 29 on June 23, Grace celebrated with a simple dinner at home. Her husband Kevin Cheng (鄭嘉穎) gifted her with a present that she really liked. “Next year will be my 30th birthday, so I’ll leave the big birthday party with friends until then!”

Though Grace has taken a two-year hiatus from TVB after getting married and there are claims that she is cancelling her contract and pursuing opportunities elsewhere, Grace shook off these rumors. Still passionate about acting, Grace hopes when her children are older, she can resume filming dramas. Denying that Kevin agreed to film TVB drama Children’s Hospital <兒童醫院> to help repay her dues, Grace said Kevin is excited to work with his good friend Kenneth Ma (馬國明) again in the drama.