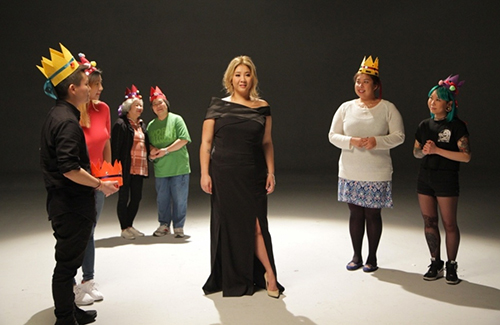 Joyce Cheng’s (鄭欣宜) powerful message in her new song “Goddess” <女神> is really what we all need right now.

The 28-year-old Canadian pop singer, also daughter of Adam Cheng (鄭少秋) and the late Lydia Shum (沈殿霞), released her latest plug “Goddess” earlier this week. On Tuesday, Joyce gave her fans a first glimpse of the music video on Facebook. The video attracted nearly 600,000 clicks on the first day it was posted—the first Hong Kong MV of 2016 to attain such a number.

In the song “Goddess”, written by Wyman Wong (黃偉文) and Pong Nan (藍奕邦), Joyce sends a message of empowerment to women, urging them to accept their bodies and love themselves for who they are, and to not pressure themselves to fit into society’s ideals.

“Do not lower your head, for the halo will fall. You are a goddess. Don’t hold back your colors for the mundane,” she sings.

Joyce, who also directed the MV for “Goddess”, invited ten women of different ages, shapes, and sizes to star in the music video. Among the ten are four beautiful magazine models, two older women, and one deaf woman. In the MV, Joyce makes a crown from scratch and puts it on each of the women, telling them that they are all goddesses in their own right. The video, shot entirely in black and white, was filmed by Joyce’s own friends.

The MV was a huge success when it was first uploaded to Facebook, peaking to over 600,000 views on the first day—a huge number for a local Hong Kong artist. Numerous celebrities, such as Charmaine Sheh (佘詩曼) and Janet Chow (周家蔚), forwarded the video to their own social media accounts. A netizen said she even cried while watching it.

Joyce said she is very thankful and touched by everyone’s support. “I wanted to say that, whether or not you meet society’s standards of beauty, we are all equally as beautiful. Self-confidence comes from knowing and believing in that. Many people see being deaf or fat as an imperfection, but that shouldn’t stop anyone in releasing their own rays of light. How others see you shouldn’t matter; it’s how you see yourself that counts. They are all beautiful and perfect goddesses.”